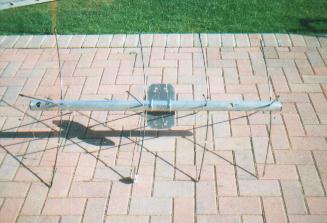 The Quad from Cubex is my pride and joy. My location is less than ideal, being extremely close to an electric railway and at the bottom of a hill to my east. The Cubex has performed better than anything tried before and picks up very little noise from the railway compared to the verticals I used to have. Thanks to Norman from Cubex and Christian from Radio33 who supplied it.

The Antenna comes boxed about 5ft long and 6 inches square and weighs a ton, well 20 lbs actually. Everything is clearly labeled and comes with a good set of instructions.

First thing is to build the 2m elements, which are pre-constructed and just need to clip into place. The boom is 2″ aluminum and the spreaders are all glass fibre. 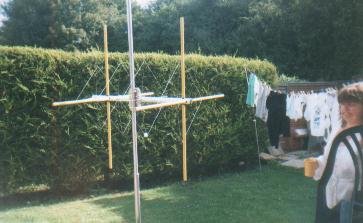 When the 2m bit is built, start on the larger spreaders.

These are 2 section glass fibre, all pre marked and pre-drilled. I used a temporary pole to mount it on whilst building.

The wife looks on with a frown, she doesn’t know yet how big it’s going to be.

Make sure you’ve got lots of space, I managed to down the washing line whilst building it.

Here it is completed but still on the ground! 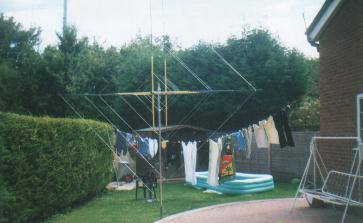 So now we have it bolted to the mast and rotator. The mast bends quite a bit while it is lifted, but once vertical seems to cope quite well. The mast is homebuilt and 34ft tall, made of 2″ aluminum tube with 1.75″ tubing inside it for rigidity and bolted to the wall in 3 places. A friend made a hinge for it, and I bought a winch from the local marina to lower it. The stainless wire cost more than the winch.

The Winch and Tilt Over Mechanism

The winch cost £15 from my local marina and is simply bolted to the base of the chimney. The hinge was built for me (I didn’t know they existed until after it was built when I saw some at a Radio Rally… Aaaarrgggh!) by a friend with a small engineering company.

The steel wire from the winch connects to the pole about half way up and only has tension on it when raising or lowering, when upright the antenna is bolted to the chimney at the top and middle. The end result is quite rigid.

HANDY TIP – Have some kind of emergency plan to save your antenna from disaster should the wire break or something else give way whilst raising or lowering. My hand slipped off the handle whilst lowering it, the handle started spinning rapidly and I could see my nice shiny antenna hurtling to the ground. I tried to grab the spinning handle and broke a finger in the process (Don’t try this at home folks, it HURTS!). Fortunately the washing line which I had been cursing whilst making the thing caught the antenna and no real damage was done ! 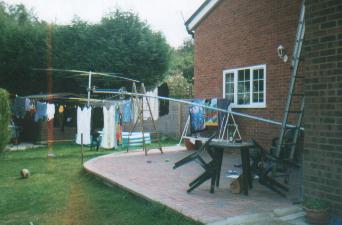 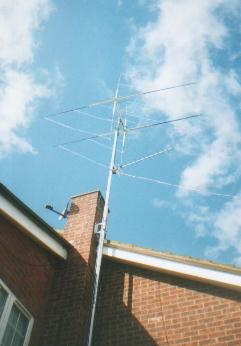 And here it is in the upright position. The TV Antenna and G5RV are about 18 inches below the lowest point of the Quad and doesn’t seem to interfere with it. Remarkable I get no TVI from it to either myself or the neighbours.

It is possible to build and erect this antenna on your own ( I did ) but it would have been a whole lot easier (and safer) with some help. 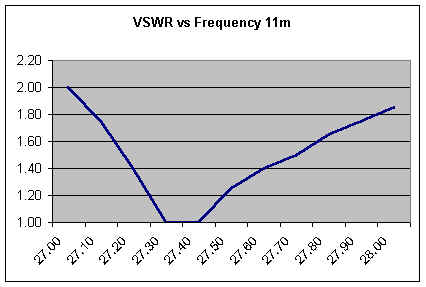 The 11m section does not have the matching stub fitted, I found I got a better (lower and wider) range of VSWR without it.

The 6m section has the matching stub fitted and it seems to be very affected by Coax length.

When I first assembled the antenna I found the 11m section had too high a center frequency and that the VSWR rose more rapidly as frequency reduced than as it increased. So I wanted to re-tune it to a lower center. To do this I lowered the antenna so I could just reach it. First I extended the total length of the driven element ( by about 6 inches ) until the center frequency was where I wanted it (regardless of VSWR) then I adjusted the reflector for minimum VSWR (also added about 6 inches to it). The result was a center of 27.4 making it usable between 27.0 and 28.0.

I have yet to make any scientific or comparative measurement of its performance. All I can say at this point is 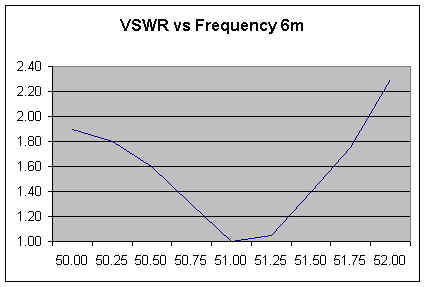 I’m pleased with it. It has good front to back and side rejection. I made the 11m element vertically polarised and the 2m/6m ones horizontal. So far been able to talk back to every station heard (no high power needed either), this is something I’ve never been able to do before.

A crude measurement of relative signal strength of a ground wave signal on 11m produced a Front reading of 7 S units, a rear reading of 3.5 S Units and side readings of 3.0 S Units.

Out of Band Receive

A surprising side effect I hadn’t bargained for, the Quad is actually very broad band on receive, i.e. it is still very directional way outside of its usable frequency range. I guess this is because of the loop. But so much so that I can use the 11m quad to locate almost any signal I want to in the HF band. I can even determine the direction to my local Medium Wave station with it !

My thanks go to Tim for the permission to reproduce this article on TM1.