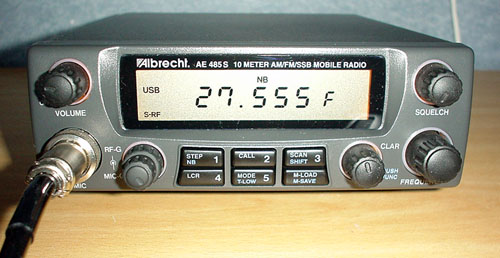 I was impressed with my new rig, out of the box. It looks smart in grey and black with a large backlit orange LCD display. Like a “90s” rig rather than a styling hangover from the 1970s like most. It isn’t too big, bigger than some CBs but smaller than a Lincoln or Ranger. (Approx. 6 by 2 by 8 inches).

Mine was the lower powered version with 12 watts output on SSB, there is a 25 watt and a 40 watt version around, the 40 watt one costing a little more.

The rig works in two “modes”. As supplied it is a 10 meter amateur band rig covering 28 to 29.7Mhz, indeed it says it’s a 10m rig on the front panel. But with an internal mod it becomes a rig capable of covering 25.160 to 29.699Mhz. Which sounds a huge coverage worth extra expense, but remember that below 26.1Mhz is a broadcast band and should be left alone. Shame this set didn’t go down another 300Khz, it could cover 12m amateur band as well. Even after it has been converted the rig reverts to 10m amateur band every time its switched on, but by pressing the function button and then the call button for 2 seconds the extra coverage is enabled. Once in CB mode, pressing the function and then call buttons will switch the set between frequency readout and channel readout. The set works in ten bands of 45 channels (40 FCC plus “alfa’s” which are denoted by an A beside the channel number). Switching bands is done by pressing the call button. So those wanting to use the CEPT band will have the channels numbered nicely, those using the UKFM band, wont.

The set has the usual volume, squelch, channel change, clarifier, mic gain and RF gain. All laid out very sensibly, the more used controls being easier to get to. The clarifier was a bit sensitive and seems to adjust the frequency by more than most SSB rigs, this is maybe to make up for the lowest frequency step being 1Khz. This is no worry for SSB users who normally stick to the “zeros” or “fives”, but remember this set will not tune exactly to the UKFM channels without further modification. 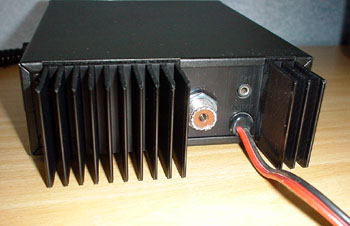 There is also 7 push buttons. The function button is actually operated by pressing the clarifier. The first button switches the frequency step. In ham mode this switches the channel change from 100Khz to 10Khz and 1Khz steps, in CB mode it only does 10 and 1Khz. Its worth mentioning that this set does not have continuous tuning like a Lincoln or Ranger. Each digit is set independently of the others. This is a serious pain in the backside for those wishing to use the rig on 10m band, but not such a big deal for 11m where channelised operation is the norm.

Further functions are last channel recall and mode button, which steps through AM, FM and SSB. No CW on this one. A Noise blanker, a two position tone control, scan (which only scans within each band of 45 channels). A programmable repeater shift which is a most welcome addition, not only for hams wanting to use the 10m repeaters, but for 11m split frequency use as well. Then there is the memory recall and save functions, there are 5 memories which can be set in ham or CB mode and will switch between the “modes” so can be used as a quick means to get into CB mode after initial power up.

Did you know that the Albrecht AE485 is also sold under these
brand names?

The display is large and easy to read. The LCD signal meter looks great as it is nearly 3 inches long and has loads of little segments, until you realise it actually works in 5 steps, so it only manages an average score. It worked well enough though.

The microphone is small and light, too small and light for me perhaps. There is up and down buttons on the top, which are the WRONG WAY ROUND. Amateur gear has the up on the right and the down on the left, this rig doesn’t. This led to a little confusion on a few occasions. 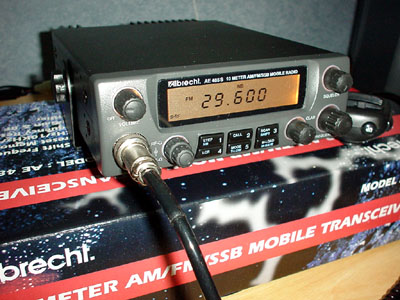 There is also a tone call button on the mic, this along with the call button (which is used as the band change in CB mode) are for repeater CTCSS tones on another more expensive model. This was not adequately explained in the instruction book).

The instruction book is reasonably clear and mine even came with a photocopy of the ham to CB switching procedure and a CB frequency chart.

The receive side was acceptably good, not as good as my Kenwood, but every bit as good as any CB I’ve ever had. The transmit side works fine with no reports from anyone, which proves they couldn’t tell I was using a different rig than usual.

This rig is quite plainly an amateur rig, which is intended to be used on CB. It finds its way into the CB shops through a legal loop hole. It’s non-continuous tuning makes it a little fiddlier than a Lincoln or Ranger, but the programmable repeater shift, extra coverage and CB channel numbering make it attractive to the CB’er but the final comment has to be, at two thirds of the price of a Lincoln and not that much more than a 80 channel Cobra, I can see a lot of these rigs being sold.

Since writing this review I have discovered that the repeater shift function varies in operation between different versions of this radio. On some models the repeater shift only works on 10m band while in “ham” mode. It is not able to be selected while in “CB” mode and therefore cannot be used on 11m band. If you intend to use split frequency operation, please check the radio will operate in the manner you require before purchase.

Many thanks to Jack who can be contacted via the webmaster of Transmission1.
This rig was tested in Australia where expanded 10m rigs are legal to possess if the owner is licensed for 10m operation.