Great value and great features make this a winning combination.

Since PMR-446 was introduced back in 1999 Binatone has been one of the first manufacturers to introduce a range of two way radios at an affordable price into the UK and European markets. Low cost radio equipment has ensured the popularity of the service and given many people the opportunity to benefit from this great form of free communication. The Binatone MR-600 continues the tradition of offering value for money but how does it compare with more expensive radios?

First impressions of the MR-600 show that this is a very attractive looking radio appealing to the consumer market rather than professional use. Our review models were supplied in a pleasing metallic silver and blue finish with a clear acrylic type speaker and display panel. Opening the box reveals a great value package which includes two radios, battery packs, drop-in double charger and 240v power supply, belt clips and two hands-free earpiece kits. Some manufacturers charge extra for battery packs and hands-free kits but with this package you get everything you need to start with. It would be hard to improve on this package – the only additional thing that would be great is a leather case for the radio but for the money I can live without one!

The batteries supplied with the MR-600 are a series of sealed NiMH batteries. To be exact these comprise of 4 AAA cells joined together with two contact points on the back of the battery back so they can be charged in situ with the drop-in desktop charger. The manual advises us that the first time the batteries are charged they must be left in the charger for 16 hours to ensure the best life from pack. In theory you can also use normal AAA cells if you are caught short of power miles from home by simply removing the battery pack.

The first thing I noticed about the MR-600 is that it won’t stand up on its own. Due to the highly rounded shape of the radio it just falls over when you try and stand it up. The only place it is secure is whilst in the desktop charger. Maybe this isn’t a real problem as you can use the belt clip or lean it against a shelf or somewhere it was just interesting to note. The radio itself is very small and only weighs about 150g including batteries, it will fit in a pocket without too many problems and fortunately Binatone provide a keypad lock facility to save embarrassment on the air.

Looking at the front panel of the radio there is a series of rubberised buttons centred around the main circular power button. Holding this down for about 2 seconds turns the radio on and off. When turning the radio on you a greeted by a short musical tone sequence and the display comes to life. While the LCD display is small on the MR-600 it is very clear and tidy with good contrast and gives more information about the status of the set than many more expensive radios. Backlighting is provided by means of green LED’s behind the LCD panel. once the radio is powered on a momentary press of the power button turns the backlighting on for about 5 seconds should you require it. Any other key press will also turn the backlighting on for the same amount of time.

Looking at the LCD it gives indication of battery level, channel number, CTCSS code and volume level, signal status and more all at the same time which is impressive and the screen still doesn’t look cluttered.

Controlling the radios functions is reasonably easy. You simply press the “mode” button a given number of times to access all the radios features. The display flashes to indicate which item you are adjusting and changes are carried out by pressing the up and down arrow keys situated on each side of the central power button. Confirming a setting change is carried out by pressing the side mounted PTT button. It’s quite an easy system to find your way around without having to read a huge user manual. If by chance you read the manual before using the MR-600 you’ll find it clear enough and written in plain English. Cycling through the menu on the MR-600 you will find the following adjustments: Channel, CTCSS Code, Scan, Call Tone, Vox Level, Timer and Auto Power Off. 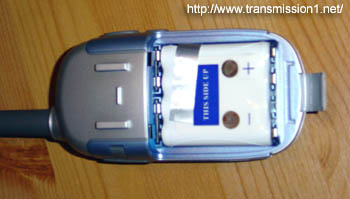 Having adjusted the settings to our preference it was time to test out how it actually worked. As soon as I get a new PMR radio the first thing I like to try out is the Scan function. There’s always something fascinating about listening to see if any other users are in the area. Within a few minutes of turning the radio on one late afternoon I found some activity on channels 5 and 8, they both sounded like business users but before I could listen in further the radio scanned on again after 4 seconds and resumed searching all the other channels. The type of scan on the Binatone is a resume one so that if a channel is constantly busy it will skip the signal and move on to the next. Whilst this is a good idea in theory I found it annoying that I couldn’t have the option to choose between hold and resume. The other point worth mentioning is that the Binatone will not decode CTCSS tones and therefore even if you find someone else on a channel you will have to work out which code they are using before joining the channel yourself.

The audio quality of the MR-600 is very clear. Sound on both transmit and receive was perfectly readable even under noisy conditions. Volume controls on the MR-600 are the simple up and down key type in 16 stages. Sound quality was on par with many more expensive radios.

The PTT button on the MR-600 is mounted on the side of the radio. Many people prefer this location to the front or centre of the radio. I must admit that it seemed the most logical place to put one on this type of radio. Directly below the PTT button you can also find a Mon button. This simply releases the squelch on the set in case you need to contact someone who is very distant from your location and is breaking up badly. Holding it down for 3 seconds releases the squelch until you cancel it by pressing the monitor button one more time.

Call tones on the MR-600 are plentiful. There are 10 different tones, 4 traditional mobile phone style ringing tones and 6 musical ones which can be very irritating if given to children! I have heard people using these radios on the channels before and the call tones are, to say the least, bizarre! It even plays happy birthday. Anyway, enough about those – I’m sure some people will find them highly amusing but others, an irritation. To make send a call tone simply press the “call” button on the front of the radio.

A keypad lock is provided on the MR-600, this is activated by holding down “lock” for more than 3 seconds. A key symbol appears on the LCD panel and the only keys that now operate are the PTT and the power button. 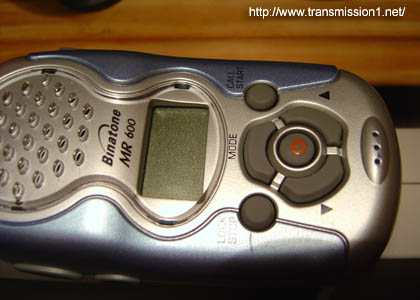 Speaking of the more advanced functions the MR-600 has a VOX (Voice operated Transmit) function which can be very useful when used with the hands-free ear piece and microphone or any other accessories you connect to the radio. The external connector on the Binatone is of the two pin variety and many common accessories will fit this radio. VOX levels can be set in three stages from 0 (off, normal) up to 3 (highest sensitivity). The VOX worked adequately in most situations and equally as good as other radios.

Auto-power off is also provided as an option on the MR-600. It can be set from off up to 3 hours. In the event of the radio being left switched on with no activity on the channel it will turn off and converse battery power. This is a very useful feature for those of you who forget to turn things off and come back to a flat battery.

Finally, another “value added” feature of the MR-600 is the stopwatch timer mode. This can be useful especially at sporting events or any place that needs a quick time check. Not essential just another nice touch.

The MR-600’s were tried and tested both in town and country and the range was found to be above average compared to some sets. Sensitivity on receive seemed reasonable but the squelch was possibly a bit high on the MR-600. Before long I was receiving various people round town and further a field. Battery life with average use also seemed good with around 12 hours usage before we needed to think about charging them again in the overnight charger.

As you can probably see, the MR-600 is a very flexible radio with some nice features and at under£50 for a pair with all the accessories included we think this package will be hard to beat. Finally, the build quality of the radio is good and they feel nice in the hand but after taking them on holiday with me in Gran Canaria with me last summer I noticed that one of the radios had rubbed against something in my travel bag and the metallic blue finish had come off in a small patch and reverted to the black plastic colour underneath the coating. It makes you wonder why radio manufacturers don’t include something like a leather case to protect the radio against knocks and scratches. Hope a manufacturer is reading this! They just aren’t available for many models. Apart from this I would have no hesitation in recommending the MR-600.

All accessories included, comprehensive package
Feature rich radio with almost all the functions you could need
Value for Money

Verdict: 4/5 – definitely worth a try for the money!