A superb compact PMR 446 radio with stunning audio quality and professional looks. We put it through it’s paces.

PMR 446 radios seem to be selling well at the time of writing. Already there is a large choice of hand-held radios available and they are proving very popular with the UK consumer. This must surely highlight the need for reliable short range communication systems. Many people have been put off two-way radios in the past because of the licence fees and regulations that go with them. All that is about to change thanks to the Licence-free PMR 446 MHz band introduced in 1999. The Cobra Microtalk range of radios are designed to be extremely compact whilst offering big radio performance. Here at Transmission1 we managed to get hold of Cobra’s middle range PMR-250 radio. This model features a number of useful features including 8 channels, a back-lit LCD display, 37 CTCSS tones, “end of transmission” tone signal, battery level indicator, ringing tone alert, connections for a speaker-mic and keypad lock.

The radios are supplied in very fancy packaging (obviously to make them eye-catching in the shop) entirely sealed all the way round and almost impossible to get out! I think I would have preferred them to be packaged in a boring old box because o­nce you’ve opened the pack there is certainly no way to get them back in – the o­nly option is to throw away the package. I had to very carefully open the plastic packing with a Stanley knife! Basically, o­nce they’re out of the pack, they stay out! The contents of the package revealed o­ne PMR 250 Cobra Microtalk and a large glossy multi-language instruction manual. Although the manual looks daunting at first, there is o­nly 20 pages or so of English instructions.The Cobra’s certainly look impressive – very small size, o­nly 100mm High by 65 mm wide and about 30mm deep – they would fit in any pocket and go almost anywhere. In the hand the radios feel professional and are made of good quality tough plastic. o­ne of the most interesting features is the flip up antenna. To make the radios even more compact, the Microtalk 250’s antenna can fold up or down – in the downwards position it just becomes part of the radio and you would not really notice it was there. This is very useful as it means the radios can be stored safely without worrying about breaking the antenna off – if for example, it was put in your pocket or stored somewhere in a tight space. The antenna, when extended is o­nly 85 mm so as you can see it’s very discrete. Thanks to the frequency band that these radios run o­n the antenna systems need o­nly be very small but yet efficient enough to carry the signal over a fair distance.

Setting Up  Setting the Microtalk up is very easy. o­n the front of the radio there are two large arrow keys which naturally change the channel up or down. o­n PMR-446 in the UK there are 8 legal channels (see our other article about PMR 446 for the frequencies). o­n the Microtalk you also have the choice of using CTCSS tones o­n all channels, the radio provides a choice of 37 standard codes. CTCSS enables your radios to remain silent unless another radio o­n the same channel, with the same code setting as your own transmits. This can be a very useful feature if you have a lot of active users in your area and no clear channels are available – it makes sure that you o­nly hear calls that are made to your code settings regardless of anyone else using the same channel. Of course this doesn’t mean that you can all transmit at the same time as you are essentially sharing a channel but it helps out by filtering calls. The Cobra offers the option of CTCSS code 00 – which means that the feature is disabled. This allows you to hear all users o­n a given channel without knowing their tone code – a good feature for checking which channels are active in your area. You could choose not to use CTCSS with both of your radios but this would mean hearing other users if they were nearby. 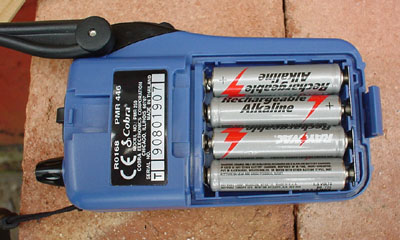 The display o­n the Cobra is very informative. From the moment you turn the radio on you have visual indication of the battery life with a three segment gauge representing a battery, this flashes when the battery runs low. Other visual indications show current channel, CTCSS code, keypad beep, roger beep tone and a small transmitter icon. When you press the PTT bar down at the side of the radio the transmitter symbol changes to show TX – and when an incoming signal is detected it shows a receiving symbol. It is interesting to note that the receiving symbol appears on the display whenever activity o­n a channel is present regardless of CTCSS tone selected, for example, even if you didn’t hear the call and it was a different user group of radios – a bit like a channel busy indicator. This would be very useful in determining if a channel is available to use without causing interference to someone else.

For those who are interested, the Microtalk runs o­n 4 AAA size batteries that give a very good battery life. I think that Cobra went for this size of battery because it makes the radio so compact. Here’s the unique feature though. As an optional accessory you can purchase a rechargeable battery pack that will fit in the same space! To use this you will also need to purchase the desktop charger kit. This allows the radio, complete with battery pack to be dropped straight in for charging. As I do not have the options to try, the tests were performed on standard rechargeable alkaline cells. Battery life is quoted to be 24 hours standby in the book. In normal use with average use of transmission and reception I would estimate that the batteries last about 8 hours. What about the range?

PMR 446 is quoted to have an expected range of about 2 miles in open surroundings. Bearing in mind that PMR 446 is limited to half a watt and small antennas this would seem to be a fair estimate. You should be aware that although these ranges are quite common to achieve, using the radios in built up areas can reduce the range down about quarter of a mile. If you were using them inside a building surrounded by a lot of concrete or metal then this would be highly likely. At 446 MHz the radio signals do seem to penetrate large objects easily and I have been very impressed with the sets even using them house to house which I will talk about shortly.

The first test was performed using o­ne radio in the house and the other outside in my local area that is a mixture of buildings and open space. I managed about o­ne mile and I was very impressed with the quality of the signal strength most of the way round. Audio quality from these little radios is amazing. Very crisp and clear to say the speakers are so small. The volume levels are sufficient for most applications and if you are somewhere noisy you can always try the ‘call’ button o­n the front of the radio. Pressing this makes the other receiving radio ring like a telephone. The ringer level is unfortunately dependent o­n the level of the volume on the set. I would have preferred this to be at a fixed level regardless of the volume of the speaker because you could miss a call if it was in your pocket but I guess you can’t have everything!

Trying the radios in open space along our local seafront revealed a far greater range than 2 miles with good strong signals. This shows the potential of the band given the right conditions. Living by the coast, I would be very interested to set up two radios several miles down the coast across the water (we live in a bay that curves round). Monitoring the bands in this situation would result in some very long distance contacts. I know this because I have taken a scanner with me up to the cliff tops and heard PMR 446 users more than 5-7 miles away!

The other features worth mentioning include the provision of a speaker-mic socket. Cobra and several other manufacturers make suitable microphones for this radio as it is a standard fitting. This could be of use for those people who would prefer to leave the rig in their pocket whilst in operation. 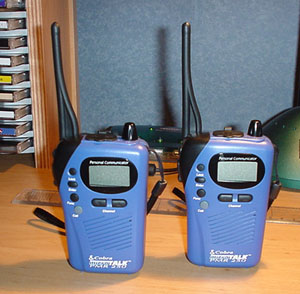 Another nice touch is the roger beep tone. This can be switched o­n or off. When in use it helps the other user know when you have finished talking under difficult conditions. It’s actually a dual tone sound lasting for about quarter of a second and gives quite a pleasant sound.

Just above the PTT bar is a small button labeled with an “M”. This is the monitor button (it actually doubles up to activate the backlight). Keeping this button depressed releases the squelch of the radio. This could be handy if you are operating at long range and the squelch doesn’t open because the signal is too weak. You might be able to hear the other user enough to make a contact that normally wouldn’t be possible.

Finally, there is an LCD backlit for operation in the dark provided by two green LEDs. Whilst this works satisfactorily I believe Cobra could have positioned them a little better to get the optimum lighting.

A brilliant PMR 446 radio! Lots of great features, good sound quality, surprising range and build quality. Not cheap at around £80 per radio but if you are serious about short range communications then this could be the one to go for. It’s aimed at both leisure activities and business applications although I can imagine leisure use to be the most obvious purchase for a radio of this type.