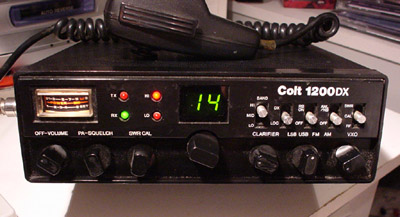 It’s been quite a number of years since these were produced! A nostalgic look at a popular SSB Radio.

Exclusive review by Simon of Transmission 1 and Paul Beckett. This radio maybe considered a classic in some respects. It dates back to the early eighties when DX was rife on the 11 metre band. The standard frequency coverage of this radio is 3 banks of 40 channels, these being Lo Mid and High Band (26.515 – 27.855) and is an all mode transceiver featuring LSB, USB, AM and FM.

It is based on the High Gain V range of radios with several improved features. This is more commonly known as a “cybernet board radio”. Features on the radio include a fairly small, but standard size analogue signal meter illuminated by a single bulb. In use this proves to be adequate to see in all light settings and makes a change from the LCD displayed panels of modern day radios. Quite a number of CB users prefer analogue signal meters due to the fact that they show a more accurate reading than digital. Digital signal meters have to represent measurements in segments meaning the information shown can be cut down.

The Colt features LED display indicators for TX, RX and another series of red LEDs to show High and Low Band. When you are using Mid Band the lights go out to indicate this. A large size green LED channel indicator makes changing channels easy even in bright sunlight, directly below this display is the rather small channel change knob. We found that in practice this is difficult to use whilst mobile and on our review radio the knob kept falling off but I think this was more to do with the fact that it is quite an old rig now – maybe a blob of glue might help!

A series of five silver switches are available to control various features within the radio – these include band change, DX and LOC for attenuating strong signals (very useful on a cybernet), a switchable roger bleep that sounds like a strangled cat (a la “hi gain 5”), an ANL/NB Noise blanker for reducing car ignition interference and finally a built-in SWR and calibration facility.

The Colt 1200 DX also gives you the usual features that we have come to expect on an SSB radio, these include, Volume, Squelch (doubling as a PA facility), SWR Cal, Clarifier for incoming signals on SSB and finally the VXO allowing you to move your transmit frequency. on the particular model we reviewed the Colt VXO enabled us to tune all the way to the “0’s” meaning that you can transmit between the standard channels, for example 27.500 MHz rather than 27.505 MHz. 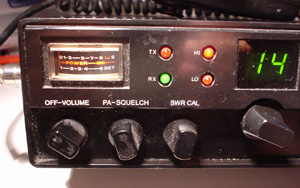 One fault with the Colt is the fact that it does not have a microphone gain control or RF power or RF gain meaning that you have very little control over your outgoing and incoming signals. The Mic gain is particularly useful on sideband when you wish to reduce your power output. This leads us to the next section nicely.

Please bear in mind that the follow report on the quality of the radio is based on an unmodified Colt 1200 DX meaning that the radio has not been expanded in coverage or power output. It is a factory standard model that has been very well preserved!

The Colt was tried in a variety of situations, we have also measured the output power and quality of modulation thanks to the help of other local operators. on AM and FM the power output of the radio was found to be in the region of 10 watts. on SSB the peak envelope power (PEP) was found to be 18W which is about average for an export class CB radio. Operators reported that the audio quality of this radio was rather poor sounding, a little compressed without any bass or top end – a bit like having a peg on your nose. We tried the radio with just a standard dynamic microphone and also with a desk mic. The desk mic did not seem to make much difference to the quality or the tone of the audio. It should be noted that the desk mic did not make the radio any louder so we suspect that some kind of audio limiting circuit is inside the rig to prevent over deviation.

We found that the audio quality on SSB was somewhat better than the FM – most operators reporting that it was useable but not the best they had heard. However, this brings us to the receive side of the colt. FM receive quality was reasonable and compared to some modern legal rigs, however the SSB quality was quite noisy but worked well enough to pick up most signals. The sensitivity of this rig was not so good with quite a few incoming low signals and was notably down against more modern radios.

You need to remember that this radio would have been state of the art around 20 years ago but since then things have moved on and most people prefer Uniden board radios as these offer beter quality on both transmit and receive in many cases. As such many of these rigs can be purchased secondhand for a small amount of money. You can expect to pay around £60-80 for one of these but look out for dodgy conversion jobs such as channel expansion mods as these tend to weaken the receive and transmit performance over such a wide bandwidth.