We take a look at a low cost 80 channel handheld aimed at UK CB users.

The Danita 608 is a compact 80 channel legal FM CB handheld radio. Over the past few years very little has changed in the way of CB radio design. Probably this is just down to the fact that CB has decreased in popularity since a few years back (it certainly has done in my area anyway). Nevertheless new radios keep appearing on the market and the Danita fills the gap for a basic, low cost 80 channel handheld. Many handheld radios are expensive, under powered and considered by many not to be worth the money. The Danita might just make you change your mind at the bargain price of £49.99 that Knights CB were selling them for last year!

Firstly, let’s take a look at what this handheld radio has to offer. For a start we have the full range of 80 legal UK channels in two banks of 40 (EU and UK). By the way, if any radios you posses read out from channel numbers 1-80 then they are certainly not the legal UK specification! One of the most bizarre features of this Handheld CB is the dual PTT bar. There is a PTT button on both sides of the radios’ case enabling left or right hand use with ease. You might think this would get knocked easily but in practice I haven’t had any accidents (yet). The Danita comes supplied with a few accessories as standard; these include a carrying case and belt clip. The first thing I did notice about the Danita in terms of appearance was that it is rather chunky! Compared to some of the modern designs of handheld such as the RadioShack TRC-1015 this is going to the larger size. The shape of the handheld is slightly box like but still fits in the hand easily.

The other thing I really should mention is that the radios seem quite lightweight, until the 9 AA size cells are inserted! Like most handheld CB radios the Danita is heavy due to its power requirements. In the book its output is quoted at 4W max on high power and 1W on low power. In reality on battery power you are unlikely to get this output and only when connected to an external power source would you be approaching this level. Ok, we’ll now take a look at the features on this rig. Surprising on a low cost radio like this one the Danita contains a full range of big radio features. These include being full microprocessor controlled with a large backlit green LCD readout which proves to be very effective in the dark. This radio features a channel scanning facility, dual watch, switchable roger bleep, high and low power and a keypad lock.

I must also mention the LCD signal meter (yes, it even has one of those) and signal strength is represented by the usual bar system that we have come to expect although this works really well in a handheld. The keypad on the front of the Danita is quite minimal as multiple presses of keys access some functions. The keys are made of rubber, as are the volume and squelch controls on top – this gives them an unusual feel but easy to use and you soon get used to it. Overall build quality of the radio seems average but adequate – the plastics used in the case are tough but lacking in that quality feel. The Danita is supplied with the almost standard rubber duck antenna. This is great for short range work but if you want to maximise the range then I’m afraid you’ll have to buy a telescopic antenna and one thing worth mentioning is that this radio doesn’t use a BNC connection, it’s the TNC sort that screws on. The other alternative antenna system would be your main home CB antenna – this would increase the range somewhat!

The on air performance of the Danita is quite impressive. I have tried the radio out in a variety of situations, these being to another handheld radio operator, to a homebase CB set up and to a mobile user. All reported good clear speech from the radio. I was surprised to find that the Danita handheld even has a roger beep that sounds like some SSB radios! Quite a pleasant sound actually but if you don’t like them there is the provision to turn it off. Audio on the incoming was very clear from other operators although I have to say that I am disappointed with the volume level of these handhelds. Most of the time I had to have the volume set well over half for normal listening. By the side of a busy road I doubt I would have any chance of hearing it! However all is not lost because Danita thoughtfully provided a speakermic socket. Unfortunately I didn’t have one to try with the radios but this might have improved the level of sound, maybe it’s just down to the small size of the speaker built in. 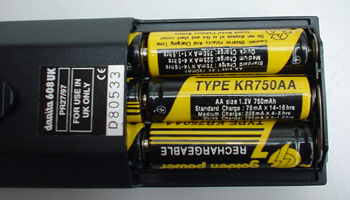 these radios. I have managed to get many hours out of one charge and of course you can power the radio from 13.8 V or charge the cells internally with the provided socket.

The ultimate question is “would I recommend this radio?” My answer to anyone on a budget would be a definite “yes” – it’s not going to win any competitions for stylish looks but for features and overall performance it’s got to be a bargain. I know that one or two people are using them as a cheap alternative to PMR-446 because they have a comparable range but obviously, the way PMR operates is totally different to CB.

If a limited budget is your concern then don’t look any further – these radios come recommended and they do the job!