We investigate the latest budget priced PMR 446 radio. Is this the one you’ve been waiting for?

I can’t believe how many PMR 446 radios have appeared recently! To say that this licence free service hasn’t been available that long the manufacturers have excelled themselves and this must prove the popularity of the service. I have been fortunate enough to be loaned a set of Maxon RS-446 radios complete with desktop charger and Ni-Mh battery packs for another great rig test!

The RS-446 fits into the category that communication dealers politely call “budget” range aimed at the home/occasional user rather than the “professional”. At the asking price of £45 +VAT each they certainly seem good value for money and may encourage those of you who thought that PMR 446 was way too expensive to go out and buy some.

Upon unpacking the radios from the dull cardboard boxes I was pleasantly surprised by how well built the radios appeared to be. Holding the RS-446 in your hand gives the impression of a solid product with a good quality finish. The colour is quite unusual for handheld, it’s a kind of silver-blue metallic on the front panel and standard black on the back. The function keys on the front of the radio are made from rubber, as is the PTT (Push to Talk) bar. Rubber keys are pretty much standard on many pieces of communication gear including mobile phones, so if it’s good enough for them it’s good enough for these handhelds!

Firstly a few notes on the specifications of these radios. They operate on all 8 legal PMR 446 channels and the power output is rated at 500mW which is the maximum power allowed on this service. As you probably will be aware, the antennas on all PMR radios are non-removable for obvious reasons. 38 CTCSS tones are available, sometimes referred to as “sub-channels” although they are not a “channel” in the true sense of the word.

The number of buttons on the RS-446 has been kept to a minimum to keep the design compact and less likely for the operator to knock a function off by accident although a lock facility has been thoughtfully provided. Keeping the FUNC key depressed for 1 second rather than a momentary press triggers this. The power key works in the same way simply hold this down for 1 second to turn the radio on or off. 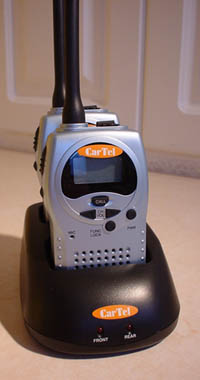 Turning on the RS-446 gave me quite a surprise when I glanced at the display – this is because they are very similar to the Cobra Microtalk range of radios we reviewed earlier in the year! The radios even make the same noises when the keys are depressed and the “end of signal” tone is the same. Whilst the display layout is slightly different I can’t help but think that the two radios have some components shared – maybe the same PLL chip and microprocessor?  Who knows but I bet that Maxon and Cobra share the same design team?

One of the first things I noticed about the RS-446 is the lack of any analogue controls such as a rotary volume control knob which is found on most communication gear. On the Maxon they have decided to go for a fully digital volume control using the up and down keys (left and right arrows). Whilst this method makes the radio sleeker looking it gives the user less control over the sets output as I soon discovered that there are only 4 different preset volume levels available. In my opinion this is a horrible way to implement a volume control, even though the display shows the current volume level the radio makes an irritating beep if you try and exceed the maximum or minimum level.  The display on the RS-446 shows nearly everything that you need to know about the current status of the radio including channel number, CTCSS tone, end of transmission bleep, remaining battery power, keypad tones and a power save mode status (this is automatically activated if the radio is left without any activity for about 15 seconds). On the display there is also a small picture of a hand-held radio that indicates when a signal is received or transmitted.

Operating the RS-446 is quite straightforward; if not a touch fiddly due to the lack of keys – all the radios’ functions are driven from the “FUNC” key. The number of key presses on this button determines the operation performed such as changing channel or CTCSS tone. When in this mode the symbol of the item you are adjusting flashes on the display and you use the left and right arrow keys to make the changes. To confirm your choice and return to normal operation you need to press the PTT bar – this acts as a confirmation button for all your adjustments. If you forget to do this then you lose the settings you have just entered!  The only other button the front panel that I have not mentioned so far is the “CALL” button. As you would expect this creates a ringing sound on the other operators set. Unlike the Cobra the Maxon simply makes a ringing sound by transmitting the warbling tones over the air. The Cobra was a little cleverer using a data link to trigger a ringing sound generated inside the set at the other end. The RS-446 makes a rather rasping ring – not very pleasant but would more than likely attract attention or cause embarrassment!

On the side of the radio is the large PTT bar, easy to operate and about 1 cm below is a “monitor” button that releases the squelch control and enables you to listen for distant stations or other operators using different CTCSS tones from your sets. Incidentally, you can turn off the CTCSS tones on these radios – just set the code to “00” and you’ll hear the lot. The monitor button also doubles as the trigger for the backlight on the LCD. A quick press turns on the lighting supplied by two green LED’s inside the set. To active the monitor you need to keep this button pushed down. 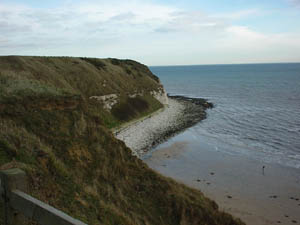 The next thing I decided to test was the on-air performance of the RS-446. To make some realistic comparisons I used a Cobra Microtalk 250 as the reference model since these radios got such a good write up in my previous review. The Maxon was tested in both very built up surrounding and also in open areas.

The scene for the built up area was a town centre with many large buildings and houses. Across this distance we managed about 1 mile without any problems with reports of very clear audio, however one rather disappointing aspect of the RS-446 was its modulation level on transmit – it was very low compared to the Cobras and whilst the sound was clear it limited it’s useful distance as the FM static got louder the modulation was more difficult to make out unlike the Cobra which remained strong and powerful. Maybe there is an internal control on the RS-446 that would enable the modulation to be increased although this should be done when the radios are manufactured. On reception the finding were different again, sound quality was very good, loud and clear – especially when I transmitted from the Cobra to the RS-446 the sound quality was excellent so Maxon only need to work on the outgoing audio to make this a winner.

The next test was achieved on the Cliff tops at Flamborough Head, East Yorkshire. This is a local high point where I have operated PMR 446 before and heard operators over 25 mile away! Leaving someone else with an RS-446 back in the car park I set off on a long walk (on a freezing cold autumn day!). I am pleased to report that the signals from the RS-446 were brilliant up here, stayed constant all the time and I couldn’t lose the station at the other end – the signal never fluctuated once showing the distance achievable under the right conditions. There is little more to say, the range seemed on a par with other PMR radios using half a watt and the antenna system was reasonably efficient for its size. I still believe that the cobra has the edge on distance and this could be down to a number of reasons including antenna efficiency, power output and also receiver sensitivity. 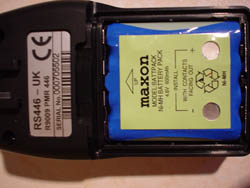 One other useful feature included in the RS-446 is the ability to scan channels for activity û using the function button (again) the radio scan be set to scan either primary channels or CTCSS codes for activity but not both at the same time. My advice would be to scan for activity without CTCSS enabled first and then once you have found something, do the CTCSS scan. This is one feature that could be real useful in locating new activity that the Microtalk 250 does not have (although built into the higher model).

The only other thing left to mention about these radios is the Desktop Charger. This is a smart black unit with two LED’s to indicate front and rear charging status. A pair of RS-446 radios can be dropped directly into these and a DC transformer is supplied to power the base. The battery pack we tested the RS-446 with is also made by Maxon and basically consists of 4 x AAA Ni-MH cells.

The RS-446 can also be run off 4 x AAA cells – this power arrangement being the same on the Cobra Microtalk. Also a socket situated o­n top of the radio is provided for a speaker-mic or headset making the radios suitable for hands free use.

If you don’t want to spend a fortune on PMR-446 these radios prove that you can get a quality, full-featured radio for a low price. The only thing that was a little disappointing was the low modulation level. Maybe Maxon will turn the next batch up a little more? The build quality is notable and these radios would be equally suited to short range communications at work or for leisure.

Since this review was written the Maxon RS-446 has now been discontinued from production (Jan 2004). It was originally distributed in the UK by Cartel Communications under their own brand name. Their website can be found here at http://www.cartel.co.uk/ the radios were priced at £45.00 each + VAT, the desktop charger and batteries are an optional extra.