Probably the most under-estimated series of radios produced in a distinctive colour. Back to the 80’s. This review was produced by Axle Jack in Australia.

Any UK CBer who has been into the hobby for a while will have seen the old Midland precision series sets. The 2001, 3001 and 4001 established themselves as major players on the UK CB scene right from legalisation day in 1981 and became some of the most popular sets available for many years afterwards. They have been superseded by newer, smaller, flashier Midlands and are not so commonly found now, but that’s no disgrace to them, as it’s been a long time since Midland stopped making them and they are still serving some faithful owners yet. (Anybody know exactly when they stopped being produced?).

The precision series were not new sets. They used a very common Maxon chassis and were similar, if not the same as, many other sets. Legal UK FM and many AM. Colt, Cobra, President, Maxcom, Commtron, Apollo and no doubt countless others used the same chassis and case. The only real differences were in the presentation. The precision series were a little different from any other rigs we had seen in 1981.

We were used to 1970s styling, black case and silver or chrome effect front panels. The 1980s brought black and grey front panels into style and a few of the new UK FM sets were these colours. But the precision series were blue. A sort of greeny duck egg blue that made them look a little special. They also used a microphone that no other CB had, it was the same case that Midland marine and VHF PMR radios used, and I think was the most comfortable hand mic I have ever used.The 2001 was the basic one with just volume, squelch and channel change controls along with a PA facility (but who used it?). The front mounted mic socket combined with the fact that this was one of the smallest sets available at the time made it easy to mount in the dashboard. There are much smaller sets now, but in 1981, this was a mini-rig.

The channel readout was green instead of the more usual red, which suited the blue paintwork and was easier on the eye at night. The analogue signal meter was also green which was unusual. The meter tended to read lower than most other sets on the market which lead to Midlands being famous for their “lazy needle”. In fact the Midlands were probably more accurate as all the other sets read far too high. But you cant fool the public who want to compare figures (just ask them about their 6db gain mobile whip?) and some people were wrongly put off Midlands because of the poor received signals.The Midlands were nothing special among the heaps of CBs available, but what they were, was basic and reliable. 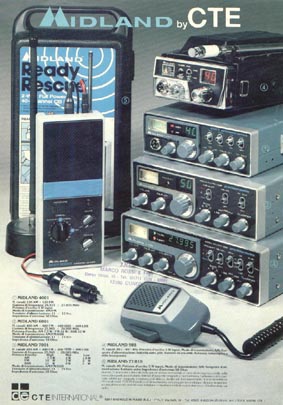 The speaker volume was loud enough, the squelch worked well, not to quick or to slow. The adjacent channel interference was average, not fantastic but much better than most FM sets were in the early days. The received audio was pleasant, a little higher in tone than most rigs. I think the bass had been filtered out a little which is better for voice communication in noisy conditions. The TX audio was also a little higher in tone, it was possible to tell a Midland rig among others on channel without being told. Maybe this was due to the sets long parentage in the US compared to a lot of FM CBs which were being made by companies new to the CB market at that time.

The precision series did have one special feature which no other CB had at the time. A built in slide mount. Instead of the usual U shaped bracket and two thumbscrews, the rig had two grooved aluminium slides fixed to the sides and the bracket had T shaped clamps which slid into the grooves and tightened with thumbscrews. This way the set could be untightened by hand and slid out from its bracket in seconds. Without all the fussing about and dropping screws in the carpet etc. Unfortunately this made the whole rig about two and a half inches wider, and a lot of the rigs had the sliding bracket removed and replaced by a more standard one to allow it to be fitted into a narrower space so many of the surviving sets don’t have this very useful but simple accessory any longer.The Midland 2001 was nothing spectacular, but it was a damn good all rounder, and to back that up I used one for about 5 years in my car and found it most agreeable.

The 3001 was the same as a 2001 but was a little wider to accommodate a few extra controls. It still had the blue colour scheme and the fancy slide mount, as all the precision series had. But also had an RF gain control and a few extra switches.The 4001 was a little wider again to fit in a few more controls. This one had a mic gain knob and one more switch. It also had an AWI light next to the TX light. AWI stood for Antenna Warning Indicator. The theory was that if the SWR went up to high this light would come on when you transmitted. The few I had never worked, but maybe I was unlucky. It still has the front mounted mic socket, which is unusual for a larger rig at the time. Performance of the 3001 and the 4001 was the same as the 2001 as they shared the same chassis. Any of these sets would compete with modern rigs and would not shame themselves. In fact due to the pleasing tone on receive and transmit I would prefer to use an old Midland over most modern rigs. But if you buy one, make sure it has the CB 27/81 roundel on the front panel, becauseà..The Midland precision series were available in many more versions than the three legal UK FM 27/81 rigs, the precision series actually went from 2001 to 7001.

All were similar in appearance to each other, but each one had a little wider case and had more controls than the last. Each was available in several different versions with different modes and number of channels. All the rigs from 2001 through to the 7001 were available as 40 channel sets for legal use in America. The 2001, 3001 and 4001 were AM only and the 5001, 6001 and 7001 were AM/SSBThere was also a 1001, an 8001 and a 9001 but these didn’t share the same chassis, appearance or features. The 1001 was a slim plastic cased AM 40 channel set similar to a Maxcom 21E (I think). The 8001 was a little like the 7001 in appearance but was internally nothing like it and is not known for being a reliable set. The 9001 is a President Lincoln “act-a-like” which was rebadged with the midland name.

However, back to the genuine precision series, the 5001 was available as a 120 channel AM/FM/SSB rig. The 6001 was 200 channel, with 4 blocks of 50. The 40 channel selector having been replaced with a 50 stop one. The first 40 channels of band “C” were the FCC channels with the correct gaps and 23 in the right place (or is it the wrong place). Incidentally, it used the same frequencies as a Superstar 2000.But the 7001 was the one we all dreamed about. It had AM, FM and SSB, and was the first CB I ever saw with a frequency readout. It had an led 5 digit display. 4 banks of 50 channels which gave it 26 to 28 Mhz coverage and a plus 5Khz switch got all the intermediate channels. It only had a regular clarifier, and not a plus or minus 5KHz RX/TX tuner like a lot of SSB sets. None of the precision series did. But with 5KHz channel spacing, who needed it. I only ever saw one once, which I bought even though it had several faults. I got it working but not properly and when I posted it to someone else, the post office lost it. (b*stards!).Below is a list of precision series rigs that I have seen and their modes and frequencies, there may be more, so if you have one that I haven’t listed, drop me an email.

If you have a full coverage 7001 that you don’t want, please drop me an email, I will be interested. Even if its been converted to 10m amateur band. Many thanks to Jack for this interesting article.