The Motorola Handie Pro is a business/commercial class two way radio transceiver covering the normal PMR 446 MHz licence free band. Many users of radio equipment will instantly recognise this unit, as it has previously been available on sale on the SRBR band (461 MHz, but due to close in 2003). Motorola have a tradition in making some very good communications equipment and they have much experience in the professional communications market having supplied radio systems to the emergency services for years.

I was fortunate enough to be loaned some of these radios for a field test and put them through their paces. Upon unpacking the box containing the Handie Pro I found it to contain the radio itself, a long NiMH battery operating at 4.8v, a plastic belt clip, instruction manual, charger base and plug in wall charger. The first thing that I noticed was the very solid construction of all the accessories. Having used cheaper PMR radios previously it was evident to see the differences and why the price of this package was somewhat higher than most people would purchase for home use.  Looking at the radio itself, the tough outer shell is made from high impact plastic finished in a pleasing professional “black and teal” effect. The radio is reasonably heavy but this adds to it’s solid feel. When a radio is used for business operations the requirements are somewhat different to the home/casual user. The radio will be in use daily for many hours and needs to be able to take the knocks and drops without failing. The Motorola looks like it could be able to stand up to some dropping or bashing about, not that I would recommend this but over it’s lifetime this would probably be inevitable (eg. If used around a building site). A range of accessories are available for this set and one of them includes a real leather case which I would add to my shopping list straight away to protect the investment in such a nice piece of gear. The cost of these radios is in excess of £150 per unit so you would be advised to sort out some kind of protective case anyway!

Looking at the front panel of this radio, the buttons are minimal and looks very user friendly. Many radios confuse the user with so many keypresses and options which just wouldn’t work in a business environment as you have to remember that not all users are trained on radio operation or enthusiasts (like most of us reading this website!). The concept behind the Motorola is “keep it simple”. Turning the radio on is a case of holding down the round purple power key on the front of the radio for 1 second. This procedure is basically the same as using a mobile phone – the radio bleeps and comes to life. The two large arrow keys on the front are used for a number of purposes. Normally they just control the volume level on a scale of one to ten but they can also be used to change the channel or CTCSS tone. Looking at the LCD screen, this is a large, easy to read display showing battery life, channel numbers and channel busy.

Programming the radios is simplicity itself due to the lack of surplus features. Pressing the star key once causes the channel number on the LCD screen to flash, moving the arrow keys left or right will change the channel number. Another press of the star key lets you change the CTCSS number (Motorola refer to the CTCSS code as a “PL code” and on some radios an “interference eliminator”), and that’s basically it for the functions. The lock key, indicated by a padlock symbol on the right hand side of the radio simply locks the keypad and stops the user from inadvertently changing the settings in their pocket or hand. When the lock is enabled the PTT bar still works and so does the power button so once you have configured the radios in your group you can lock the settings and you will probably never need to change them for a long time (other than for volume adjustment). The lock is activated and deactivated by holding the lock button down for one second. The only other button left to mention is the round black one opposite to the power button, this is the monitor button and allows you to open the squelch. If the monitor button is held down for more than one second then you can leave the squelch open until cancelled. Moving to the left-hand side of the radio you will find a large rubberised PTT bar in an oval shape mounted towards the top of the radio. This is very easy to press and has a positive feel. When the PTT bar is pressed to transmit this causes a icon of a transmitter to appear on the LCD screen indicating TX. Likewise on receiving a signal the transmitter icon appears again to alert the user that the channel is busy. This is a good indication that someone else may be transmitting on the channel using another CTCSS code.

Trying out the radio was a pleasure, it was so easy to set up and use with my other PMR 446 radios as the CTCSS codes matched up with the same numbers as my other test radios. The set was used in a variety of locations and found to produce excellent quality audio on both transmit and receive. Audio from the Motorola was found to be crisp and clear even speaking along way from the microphone due to the speech compression circuit inside the radio. Even when the audio was being received on radios other than the Motorola brand reported audio was said to be very punchy. With regards to the distance obtained in a built up area I managed to make several contacts across town without problems, many of which were in excess of two miles. Even though I was indoors reception and transmission were excellent with very little flutter as I moved from one room to another. I actually use a set of these radios at work and whilst we don’t normally talk to people away from the site I was able to hear the activities on the channel when I took my radio home one lunchtime. I don’t live that far away from my place of work so this was easily possible. 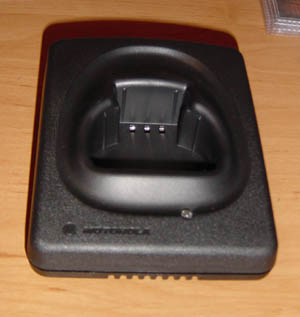 Battery life on the Motorola is excellent thanks to the good quality NiMH battery supplied with the desktop charger in the package. At work, with average usage, we can get nearly two whole work days out of the radios but if the charge does go down the rapid charger base soon has them back up to full power within about an hour and a half. The charger unit is a traditional black square block that feels very solid on your desk. Simply drop the radio into the base and it charges. An LED indicator shows the state of charge, starting off red for rapid charge, flashing green for topping off and finally steady green for charge complete. The charger base can charge a separate NiMH battery without the radio being present should you wish to keep a spare ready for action.

The only other part of this radio I haven’t mentioned until now is the hands free kit. Although I didn’t have one available to try for the review it simply plugs into the side mounted socket on the right of the radio and this activates a VOX (voice operated) option on the star programming key. From this menu you can select VOX sensitivity. A headphone symbol appears on the display to indicate this operation.

A number of useful accessories are available for the Motorola Handie Pro including a waterproof bag called an “aqua bag”, should you be using the radio in wet conditions, for example, on a boat or in a garden centre or any other outdoor activities.

One last word about this radio is on the manual. It is very concise at 15 small pages but it tells you everything you need to know in a logical manner. The operation is very straight forward so you won’t refer to the manual very often.

The Motorola Handie Pro is a very capable business class radio and I am sure it will find many different applications. It’s excellent build quality means it should last a long time even under heavy work conditions. The simplicity of operation for non-technical users is a real bonus. The features available are very basic but reliable. No frills are provided and this makes it an excellent choice for ease of use.    At £150 per unit, these radios are certainly not cheap and will probably not appeal to home/recreational users. However, business users will appreciate the build quality and the purchase of these sets will easily outlast investments in cheaper radios many times over. They are available from all good stockists including http://www.radios-uk.com/ – why not take a wander over to their online shop and have a browse around. They can also supply all the accessories mentioned in the review.