As a little break from the normal reviewing style that you’ve come to expect from Transmission1.Net we thought we’d share a fun piece of equipment with our readers, the Motorola T4302. Teluwatt provided the radios for this review and I would like to say thanks to Liam for the support with the website reviews.

The T4302 is clearly aimed at the leisure user rather than business and this two way radio aims to capture the younger part of the market in particular. Why? Because it’s got one of the most unusual designs we’ve ever seen for a two way radio – looking a bit like a couple of red and yellow peppers at a distance! To be totally honest, it doesn’t even look like a conventional two way radio which may encourage some people to give two-way radio a try, especially children. Throwing away that anorak image of the radio ham is what Motorola have achieved here through a slim, rounded and highly coloured design which was a winner at the Las Vegas Consumer Electronics Show Innovations Award 2002.

The radios are supplied as a pair – 1 yellow and 1 red. Breaking traditions yet again the radios operate on 4 AAA cell batteries – this serves two purposes, keeping the weight and size of the units down to a minimum. The first thing you notice about these radios is the lack of an external antenna. This is because the antenna is actually built inside the radio and located at the top of the set in the navy blue part with the carry strap through the centre. The potential for breaking the antenna has now become somewhat lower and it also means that they will fit in a pocket very nicely without the risk of an embarrassing accident when bending down! 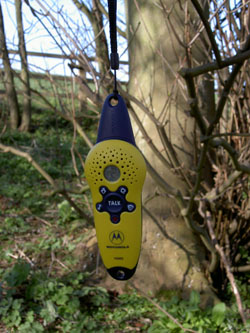 The T4302 is very smooth and sleek. It’s definitely not your average two way radio as it won’t take up much room no matter where you put it. With the supplied carry strap it can be hung almost anywhere when not in use – on a hook, on the back of a door, from a bike handlebar, in a car, or even a branch on a tree as illustrated from our field test exercise! These would make ideal radios for wherever space is limited as they will always find a place to live. one of the first things I thought about was that these radios would be suitable for kids as they are always dropping things. Thanks to the rounded design and lightweight they are likely to survive the knocks and drops that kids might give them whilst in use. During the review we did actually drop them several times in the countryside and nothing could stop them from working.

The T4302 is simply an 8 channel radio. No fancy features here – no CTCSS so you have to accept everything that the 446 band throws at you meaning that if you use these in a busy area then you are likely to hear quite a lot of users along with your own party of people. We have no fancy call tones either – just the one telephone style ringing tone. The volume control is also basic – two arrow keys up and down control the settings but this is all you really need. At this point it’s worth talking about the central control buttons. They look a bit like a “splat” in the middle of the radio. one centrally mounted PTT bar to transmit and one power button that you hold down for a couple of seconds to turn on or off the radio. Simple so far? one of the strangest buttons on the control “splat” is the smiling face. This wasn’t quite so obvious as to what it did but after investigating it simply lets you change the channel in combination with the arrow keys, up or down. If you hold down this button for two seconds it also allows you to open up the squelch on the radio for long distance signals. This facility is called a “monitor” function and to cancel it you simply press the same button again.

The LCD display on the T4302 is small and circular in design. There is no backlighting in this which could make operation difficult at night time but it also helps conserve battery power meaning those AAA cells will last for hours – and they did during our tests. I noticed that on this LCD was a set of segments running around this circular display. In standby mode these segments chase round the edge of the screen – a bit like a screen saver and whilst receiving a signal they all appear and start flashing. It doesn’t really serve any purpose put looks cool on the screen in addition to the normal large channel number in the centre of this display. As regards functions that’s about it on the display and the radio. The radio has a small “Motorola” style bleep that is common to all their PMR sets so on the air it sounds very similar to all the rest. 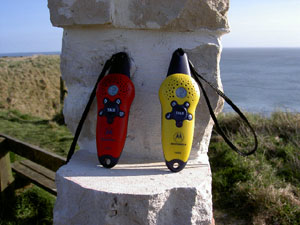 Regarding the actual on-air performance of these radios they were surprisingly good. For the price of them I didn’t really expect the audio quality to be as good as the bigger sets but I was quite amazed when we tried them with a Motorola T6222 – the audio quality was crisp and clear and the incoming audio on the T4302 was also very good but as you can probably imagine for the size of the built in speaker, was a little on the quiet side and if volume level was increased too much, distortion would occur. That said, they are fantastic for the size and weight. Receiver wise, the T4302 managed to receive quite a few distant signals at our usual test location. It was difficult to get back to some people though to check the outgoing signal because of the lack of CTCSS tones. Between the 2 units we managed well over a mile of contact and to say that no external antenna is present on the unit I’m pretty much impressed. 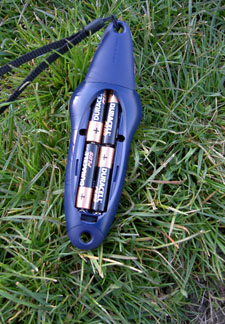 The conclusion of my trial with the pair of Motorola T430’s is that they are excellent for a basic 446 radio and would be ideal for kids as they are quite robust and can be dropped a few times. They are also ideal for anyone who needs cheap but reliable short range communications – even shop storeroom use where the radios don’t require very long distance ranges. Available from under £30 from Teluwatt these are excellent value for money. A friend tells me that he uses a pair in his car and hangs them over the rear-view mirror using the carry strap – a bit like an air-freshener and uses them to keep in touch with his friends who are a few cars apart whilst driving! Great idea but don’t forget the laws within your country that may apply regarding operating mobile phones and communication equipment whilst driving. Had to put that bit in before someone accuses me of encouraging illegal activities! – TM1

Compact, Fun Design and affordable prices makes this a must have for the first time PMR buyer or the budget user. Available for less than £30 in some retailers including Teluwatt.