Transmission1 takes a look at this ever popular and controversial legal 80 channel rig.

Upon unpacking the compact blue and silver box, the sight of the Realistic TRC-1080 is very familiar. Many people will certainly recognise this radio instantly as a Maycom EM-27. The Maycom 80 channel mobile has been around in the UK for about 2 years now.

In the UK Tandy decided to sell this small 80 channel mobile under the widely recognised “Radio Shack” brand name. Quite why this is so I’m not sure as this brand is often the subject of jokes, especially in the US. What was wrong with leaving the Korean Maycom brand on them?

Taking a first glance at the radio you could be forgiven for thinking that it is a 2 meter band ham radio since it has a professional looking finish that you would probably not expect to find in a CB radio of this class. The quality of finish, combined with a sleek and shiny large LCD panel make this an attractive piece of radio gear that would look equally at home in your car or on desk in “the shack”. 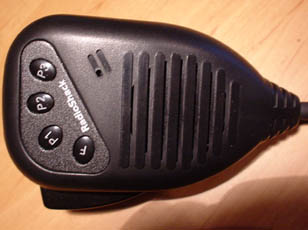 Turning the radio on is a different procedure from many standard CB radios, a red power button on the front of the radio near the front mounted microphone socket needs to be held down for about 1 second to power the rig up. A nice little touch is that when the radio is turned off the red power button glows enabling you to find the control in the darkness. A feature most useful for mobile operation, of course this relies on a constant supply of power to the radio for this function to work!

As the rig powers up you hear the confirmation “beep” and the panel lights appear. It is worth noting that all controls including the volume, squelch, RF gain etc all illuminate with an orange glow around them. The LCD illumination also seems sufficient, whilst not the brightest I have seen it does the job when you need it – in the dark! The LCD digits on the display as easy to read and are different from those I have seen before, they appear in a dark purple/navy colour rather than the more common black/grey. Looking at the information the LCD panel can display, current channel and band indications are shown clearly plus the added bonus of the radio frequency. Many CB’ers work with channel numbers but for those interested in DX contacts you also have the frequency display – most impressive and should cater for all tastes. The LCD panel also shows signal level in the obligatory LCD bar format and in addition to all this, the current operating status, eg the options that are selected such as scanning etc.

Ok, let’s take a look at the features! This radio has more features crammed into a small space than I’ve ever seen before at this size. The basic controls are the same as most modern radios and include the volume, squelch and RF gain controls plus a rotary channel change the sets up one channel at a time – this makes a positive click sound as it is turned. A front mounted microphone socket is a welcome addition and makes for easy mounting in tight spaces in most modern cars.

Moving on to the more interesting features the radio has a number of small function buttons on the front panel. The operation of these buttons varies depending on which mode the radio is currently in. The legend for each button appears on the LCD display directly above. This is a clever idea, often used in mobile phones where one button has several features. The function buttons also double as memories – up to 7 frequently used channels can be stored as presets. In this review I won’t list all the functions as some as self-explanatory such as LCR (last channel recall) and EMG (emergency channel) but we will take a look at the more interesting ones! 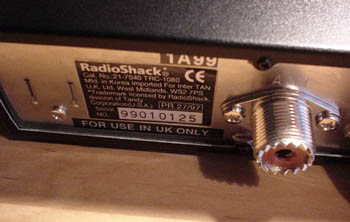 Scanning – the TRC-1080 has a channel scanning facility built in so active channels can be located quickly. In theory, scanning sound like an extremely useful facility to have on a CB radio but in practice this is not the case. The one major disappointment on this radio is the fact that it can only scan 40 channels at a time and not the full 80. I’ve yet to find a legal radio that does! That aside the scanning speed is reasonable and did its job sufficiently well. I must admit that I am not a big fan of scanning on CB radios. I generally find that the band is too noisy with interference and propagation that makes the scan stop on nearly every other channel so limiting its’ usefulness.
The TRC-1080 is equipped with something called “auto-Q” which is supposed to act like a squelch control – when enabled this dampens the sound of the FM static hiss making signals sound more like they are coming through an AM radio. If you’ve used an AM rig you’ll know that you can leave the squelch wide open and not get your ears blown off! The idea is great but it also dampens the quality of the audio on this rig. I’d rather leave it switched off and put up with the extra noise.

A monitor function is also supplied as one of the main functions – this simply releases the squelch so you can listen for distant stations without turning the squelch knob all the way down or losing it’s current setting. A switchable beep is also provided for confirmation purposes. Every time you press a key the rig emits a short beep which might be useful for mobile purposes. It’s not really irritating but this can be turned off completely with the press of one function key.

Pressing the “function” key changes the legends on the menu so the keys behave differently again, some of the other features available include the band change selector – this toggles between UK and EU bands and one other interesting feature is the voltage checker. A press of this button will show the radios’ input voltage – this could be useful whilst mobile to check that your battery is not going flat – it might save the surprise of the car engine not starting after a long session on the radio! At home this could be useful for checking that your power supply is performing correctly and not going over voltage. DW (Dual Watch) is also provided for monitoring two channels – you could monitor the call channel whilst listening to a QSO elsewhere but this feature again, only works across one band. You can’t listen to an EU channel at the same time as monitoring UK 19 to give you a classic example.

So far I haven’t mentioned the microphone. This is a special design that was clearly made just for this particular radio as some of the more commonly used features are available from here. Up and down channel change are provided on top of the mic but on the front three keys plus a function button give access to other features as on the front panel LCD. This is a great idea for mobile use but the obvious one is missing, the band selector! I know it sounds crazy but you can’t change the band from UK to EU without using the control on the front panel – not from the mic! This is a serious oversight and one, which I hope, will be put right if the radio is revised in the future. There are unconfirmed reports around that suggest this can be done with some sequence of key presses but I was unable to try it.

Having tried the radio out on the air, my findings are based on a practical test rather than scientific evidence or specifications. Firstly I decided to just tune around and listen to the various stations on air at the time of the test. I’m pleased to report the receive performance seemed very good with crisp clear audio coming through the built in speaker. Receive sensitivity appeared to be good for a radio of this class and adjacent channel rejected was average whilst connected to my Shakespeare ABS-1600. Obviously the signal strength of local stations was quite high so the radio performed well under these circumstances.

Looking at the transmit side of things the radio performed well and the legal power output was met exactly at 4w into a dummy load. Into the ABS-1600 antenna reports of very clear signal with excellent audio quality were given by local and more distant stations, one or two people thought I was using a desk mic as the audio was very punchy, crisp and clear even when holding the mic at arms length. Tone quality was reported to be well balanced so the radio passes with flying colours in this department. It proves that good audio quality does not always require a desk microphone to be loud.

The Radio Shack TRC-1080/Maycom EM-27 is an extremely capable radio and if you like rigs with many features, you won’t be disappointed. The set performs well at home or in the car. The LCD display is very professional looking and easy to read. At around £100 the radio could be considered a little pricey for just 80 channels of FM.

Jack, our regular contributor to Transmission1, writes to me regarding the Maycom/TRC-1080 review and adds the following comments about common problems with this radio. These comments may help one or two people out:

“The early Maycoms were all recalled to the factory because the machine that strips the wire for the mic plug to be soldered on stripped to much, leaving bare wire inside the plug which could short out. My first one did this and the function buttons on the mic stopped working, even after the short had been rectified, this is quite common. After it had been sent back, they replaced it with another which still had bare wires in the plug, after explaining to me what the problem was and how they had fixed them all. So check the mic wiring. Also, they are prone to dirty TX switches in the mic. resulting in the rig not tx’ing when you press the button. A spray of switch cleaner sorted mine. I have known quite a few suffer from these problems”.