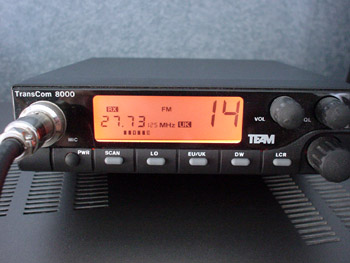 Team’s latest mobile rig is put to the test. We check out this compact radio and see what it can do!

The Team Transcom 8000 is the latest mobile rig from Team and imported into the UK by Nevada, Portsmouth. Acquiring one of these radios in a deal recently I decided to see what it’s performance was like and took the opportunity to use it both mobile and at home.

My previous experience of Team products back around 1989 was not a very good one and I know that at this point in time many people were disappointed in the brand, it’s performance and general build quality. Indeed, the first Team rig that I owned has a number of problems including poor quality modulation and overheating of the output stages. However, over 10 years later I decided to approach this new radio with an open mind and I’m glad that I did.

The build quality of team products has certainly come on a long way since those early days. The finish of this radio is very smooth to touch and the case has a solid feel to it. One of the things I did notice is that the case fits together properly! I know that sounds stupid but on some radios I have had the pleasure (?) of using before I noticed that there was a large gap between two panels, not good. Looking at the front of the radio, the panel is well laid out and a very bright, clear LCD display gives all the important information. LCD panels seem to be the standard on most new radios.

The large LCD panel in the Transcom 8000 is very easy to read. One of the most important features for mobile use is the back lit display. It is very bright and illuminated in amber. The most useful feature on the radio is the ability to display both channel and frequency read out simultaneously.
It might not sound like a big deal but we must not forget that some people work with channel numbers, especially on the UK band. The signal meter and a whole host of other functions are built into the LCD panel too, indicating the various states of operation. I found the LCD signal meter to be quite sufficient for at-a-glance checks whilst mobile.

The control knobs and buttons on the front of the radio are self explanatory and comprise of the usual functions you would expect to find on a legal 80 channel rig. Volume, Squelch and channel change knob. These three controls are rubberised and have quite a pleasant feel to them. The microphone socket is front mounted and this could be a benefit in certain installations ‘in-car’ where space is limited. The other 6 push button controls on the front of the rig are as follows: Power, Scan, Lock Out, UK/EU band selection, Dual Watch, Last Channel Recall.

The standard microphone supplied with the rig is exactly that, very standard. It has quite a cheap feel to it, which in my opinion is inexcusable considering that the rig seems very well made. The microphone is cheap and tacky, lightweight and whilst I was testing the radio the mic stopped working completely, the rig would not transmit and it turns out that a break occurred in the wiring. I continued the review with a much better ‘Kernow’ microphone and got the added advantage of up and down keys. The Transcom mic socket actually supports the up and down channel change facility but the standard supplied mic doesn’t! So, if you are considering going mobile, it may be a good idea to budget for a better microphone. I must have just been unlucky with my mic considering the problems I experienced after a short period of time.

First test was to check the received incoming audio of the rig. I am pleased to say that the built in speaker was quite impressive, loud clear and crisp. Plenty of good tone quality and loud enough for mobile use. The rig seemed quite sensitive and I could hear many distant conversations going on in my nearest city about 25 mile away indicating that the sensitivity of the radio is up to standard.

On the transmit side of things I got some very good reports from the audio quality using the standard microphone (before it stopped working) – other users said that the quality was loud and clear and very crisp. It was almost as if the team had an audio compression circuit inside because I could hold the mic at arms length and still be the same volume to other stations (all reported a radio report of 5). Not happy with relying on other users to give me a report on audio quality, I did one of my old tricks – use a scanning receiver with headphones on to listen to my own radio! Using this technique I can monitor the audio quality without feedback and I can confirm that the tone quality from the standard mic was exceptionally good.

Using the radio mobile also proved effective. Very little engine noise from the car was reported and very little noise from ignition sources on the incoming signals either which is more than can be said for some radios used in car. The radio does make a difference when it comes to picking up engine noise even if the car is well suppressed. 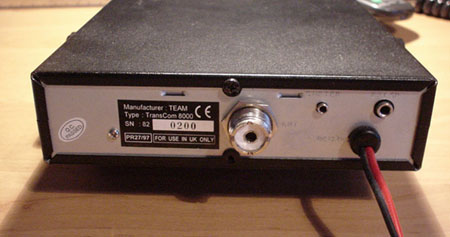 As with most modern microprocessor based rigs the Team Transcom contains a few extra features. Scanning is one of the features, this gives the radio the ability to scan the bands for active channels but note that you cannot scan all 80 channels in one go. The scan function works for only the band that you are currently tuned to, ie UK or EU. The scan rate is quite fast but has the annoying feature of “resuming”, this means that if an active channel is found then it will only stop on it for 5 seconds before flying off to the next active channel. I can see why Team designed it like this – in case of noisy band conditions so the rig doesn’t get stuck on one channel when strong SSB stations are on the band but I wish it could be turned off as it limits the usefulness of such a feature. The only other thing I should mention is the LO button on the front panel of the rig. This enables the user to skip busy channels whilst scanning (useful for channels occupied by music players!).

Dual Watch is also provided and is quite simple to understand. It allows you to monitor two channels for activity by monitoring each one for a couple of seconds. If a station is found on one of the channels then the rig would switch to the active one. For example, in my area, two calling channels are used, both 14 and 19. Thanks to this feature I can monitor both of them by pressing the Dual Watch button on the first channel and then moving the rig to another channel. In the event of the user making a transmission whilst in Dual Watch the rig switches off the feature and goes to the primary active channel.

There are one or two other small features on the rig too, such as last channel recall and the band selection button. Since the rig is an 80 channel approved version there is a band selector button labeled EU/UK. Pressing this will select the appropriate band and the display indicates the current band setting.

The Team Transcom is a very capable radio and for the price, it’s most reasonable. The overall build quality is very good apart from the microphone which when used mobile could be insufficient and easily damaged with day-to-day wear and tear. However, don’t let that put you off, you can always replace the mic with one of your choice. I wouldn’t recommend a power mic as the modulation seems very good and the standard dynamic mic would prove more effective against road noise when mobile. Would I buy one? Well, yes but I will be keeping this review model anyway since I got it at reasonable price. The new price of the radio is £99 inc Vat and is available from Nevada, Portsmouth.