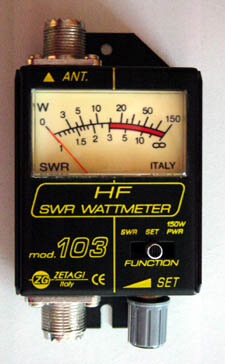 No matter how you look at it, SWR is the most important part of radio theory. Here you can put it into practice.

So you have connected up your new CB and installed the antenna. Now you have to tune, or SWR it. You may have been told that this is the next move, but most likely will not have been told why or how.

What is SWR? Its full title is really VSWR, and it stands for Voltage Standing Wave Ratio. Now I won’t go into huge detail about the physics involved in voltage, current and different types of RF fields involved because if you get interested in that sort of stuff, you can get a book about it written by someone more knowledgeable than I. While you are driving about in your car yakking to other CB’ers, all you want to know is that its working. Put basically, the SWR is a reading of how well your antenna is tuned to the frequency you are using.

When you transmit with your CB, 4 watts of power goes out of the plug on the back and up the co-ax cable to the antenna. It is then radiated out into the atmosphere to be received by other CBers and arrives at the speaker of their rig. Oversimplified maybe, but as complicated as we need to get. If your antenna is properly tuned it will radiate all the power sent up the cable. If it is poorly tuned it will be unable to radiate all the 4 watts, and some will be reflected back down the co-ax cable to the rig. If the antenna is very badly tuned, or if the antenna or cable has a fault and is not connecting properly, a lot of the 4 watts will be reflected back to the radio, and if this happens the radio is in danger of being damaged. This is no fairy tale, I’ve done it myself. I had a cable fault causing a very high SWR, and within a minutes fiddling to see why the thing wasn’t working I had blown the output transistor. It only cost a few quid to repair, but was a major pain in the bum.

So how do we adjust this “SWR” thingy then? Well first we must check to see what the SWR reading is at the moment. Get yourself an SWR meter. There are loads available, some complicated with several meters and different things to measure, but a basic simple meter is all that is required. The basic meter has a meter (Doh!), a calibration knob and a switch. The switch is usually marked with the words Forward and Reflect, or FWD and REF. You’ll also need a patch lead which is a little bit of cable with PL259 co-axial plugs (that’s the same kind as your antenna has) at either end. 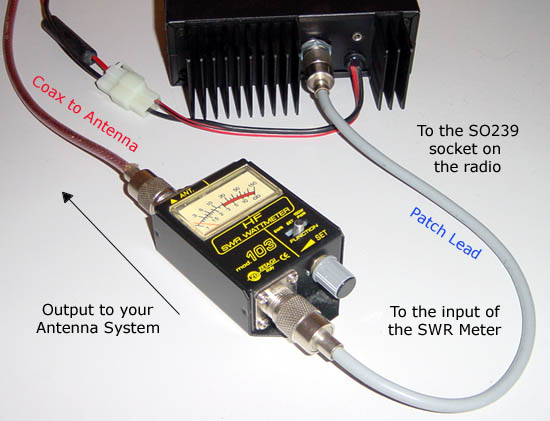 Connect the patch lead into the plug on the back of the radio, and connect the other end to the plug marked “transmitter” on the meter. Try looking on the front, its not always marked next to the socket. Then plug the antenna into the “antenna” socket on the meter. Next switch the radio on and select channel 20. Assuming there’s nobody talking on channel 20, press the button and transmit. Select “forward” on the little switch. Now the meter will be reading something, so adjust the knob so the needle is over at the right side of the meter on the “set” mark. Now stop transmitting and slide the switch over to “reflect”. Transmit again, and whatever the meter reads now is your SWR reading.

Now this reading is a ratio, so the lowest reading possible is 1 (as in 1 to 1). You will never get a reading of 1, its very difficult to achieve and not worth the hassle. If it’s below 1.5, be happy, that’s great. If it’s under 2, fine no worries. If it’s under 3, you’ll need to adjust that to get it below 2. If it’s above 3. STOP TRANSMITTING, you could damage your radio.

After adjustment, check the reading on channels 1, 20 and 40. If all are below 2, and channel 20 is lower than 1 and 40, you’ll not improve it much. It’ll work fine and wont cause damage to your radio so just get on and enjoy your CB. There is much effort wasted trying to achieve the fabled “one to one SWR” in the misguided opinion that the antenna isn’t working properly unless the SWR meter doesn’t move off the stop. If you are a lonely and bored individual with plenty spare time, then go for it, but if you have a life, do something else. Once you get all the channels SWR below 2, don’t worry about it, the amount of power that isn’t being radiated by the antenna is so small it wont make any noticeable difference.

At this point I should mention antenna bandwidth. Most cheaper CB antennas have a workable bandwidth of about half a megahertz, which means the SWR is below a reading of 2 over about 50 channels. So if you get the SWR down to say 1.3 on channel 20 (which is a very respectable result) then the reading on channels 1 and 40 will be up about 1.7. That is, the SWR is “centered” around channel 20, and the further away from channel 20 you go, the higher the SWR gets. This is no problem if you are using a 40 channel rig, but if you have an 80 channel set, you’ll need an antenna with a wider bandwidth. The lowest frequency on EU channels is 26.965Mhz, and the highest on UK is 27.99125Mhz. So you’ll need an antenna with a workable bandwidth of just over one megahertz. Fortunately there are plenty available, but you might have to spend a little extra to get one. You’ll also need to center your SWR between the two bands of 40 channels so that the workable bandwidth covers all 80 channels. Instead of using channels 1, 20 and 40 to set your SWR. You could use channels EU1, UK1 and UK40. Centering the SWR at UK1 will give a good spread of antenna bandwidth across all 80 channels.

But what if you’ve adjusted the length until your pulling your hair out and it won’t tune in at all. If the SWR is in the red (above 3) on channel 40 but maybe 2.5 on 1, and you have reached the end of the adjustment, it maybe needs a bit cut off it. Some antennas are supplied a little bit to long on the assumption that different people want to use the antenna for different purposes, and its easy to cut a bit off, but not so easy to add a bit on. If this is the case, get a hacksaw and trim a quarter of an inch off it. If this improves the situation, trim a little more. Hopefully this will get the SWR down to acceptable readings. Remember to trim a little at a time though. You can’t stick it back on once you’ve chopped it off.

If the SWR is way into the red on all channels. Likelihood is you have a fault somewhere. Check the cable with an ohmmeter to make sure there is no shorts or faults and that the plugs are properly fitted. Check there is no rainwater in the plugs or cable, as this will screw everything up big time. Check the antenna for the same, but be warned some antennas will give a “short to earth” reading even when they are healthy as there is an inductor across the loading coil. Make sure the antenna has a good ground plane, i.e. it’s solidly secured to a large metal object, like your car. Or in the case of a magnetic mount, is stuck to a large metal object. Fibreglass panels are commonly used, especially in truck cab roofs, and they don’t help efficient tuning of antennas one bit. If you can’t see anything wrong try someone else’s antenna and try to find what’s faulty by elimination. If you don’t know how to work an ohmmeter, its time to call someone who does. There are some things that are easier to learn about by seeing them :

People will tell you the co-ax length is the problem. They will tell you it has to be a certain length and that by trimming it you’ll get a better SWR.. CRAP! The only thing you need to remember about co-ax cable is to avoid hugely long runs, as you’ll start to loose power. It does not effect SWR. If you have a very long run in the base station, make sure you buy good quality co-ax and not the stuff that the guy at “Honest Johns mobile phone and CB supply cupboard” tells you is good. Consult an amateur radio shop in this case and be prepared to spend a bit more money. The issue of co-ax length is a keenly debated subject by people a hell of a lot cleverer than you or I, and they cant decide what’s best. So for all practical purposes, the shortest length of co-ax you need the better.

I hope you’ve managed to adjust your SWR to acceptable levels, or confirmed that’s its OK. Remember to check it once in a while or whenever you whack that antenna off a low tree. Keep the mounting clean from rust, as that’ll make the SWR go wonky. If you have space, leave the SWR meter in line all the time so you can check it whenever you want. It won’t do any harm or cut down your output power, as some people seem to think.

You see, its not really that complicated after all.

Credits for this article