Surprising how far these short range devices can carry. Not just around the house but way beyond! A look at low power device monitoring.

It is a well known fact that many radio systems are moving over to secure digital communications – the Police, Fire Services and many other government users are gradually disappearing from our scanners with virtually no known way of being able to decode the transmissions. The same would be true of cordless telephone technology, with the release of DECT digital phones in the past few years and the benefits of using this technology you would expect analogue usage to be on the decline. Not so! In fact, more than ever the analogue cordless phone band is crammed full of users! Why would this be happening? Let’s take a look at a few possibilities. 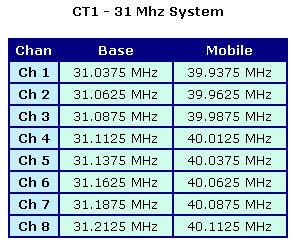 The first reason is cost. DECT telephones are quite a lot more expensive than analogue equivalents and as such many people, unaware of the differences, for example security, go for a cheaper model as it ‘does just the same job’. I saw some cordless phones in a shop during a January sale, they were priced at £19.99 which is an absolute give-away price. Is it any wonder they sold? The other reason for the popularity of analogue is the release of a whole batch of relatively new frequencies in the 31 MHz region (introduced 1996) – these devices promise a greater range than the standard 47 MHz analogue band (the original 8 channel specification here in the UK known as CT1). The analogue phone system works by operating o­n two frequencies known as full-duplex operation. This means that the device is capable of transmitting and receiving at the same time, as you would expect! The base uses o­ne frequency for TX and the other for RX and vice-versa at the handheld end of things.

Ranges quoted in the specifications of cordless phones usually state something like 50 metres from the base for the 47 MHz variety and anything up to 300 metres in open air from a 31 MHz base station. In total there are 16 standard analogue channels within the UK cordless phone system. The main difference between the two systems is that the original 47 MHz variety of base stations transmit to the handheld on a very low frequency just above the medium wave broadcast band. Take a look at the table below: All channels operate o­n NBFM. 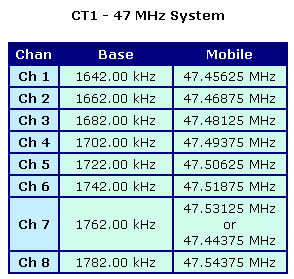 There is also another less heard of system in the UK which is a variant of the above CT1 system but designed for long range communications up to 2 Km with extra power primarily designed for use in rural areas.

Monitoring these frequencies with a scanner will provide surprising results. Not only will you be able to hear phones around your immediate area – eg your own analogue cordless phone but also many others in your neighborhood because the signals carry much further than the average phone owner would imagine. The actual handsets and bases supplied with most phones are quite insensitive to low signals, most likely this is the manufacturers intention to keep the range down to avoid possible interference problems with neighboring telephones. However, with a sensitive scanning receiver and antenna system some of these phone can be picked up over distances of 1.5 Km and above! Of course, this depends on a number of factors, these being the site the base station is installed in. If a user installs a base station on high ground (e.g. upstairs in a house) the the signal will be carried further. I recommend monitoring the base station frequencies because you can hear these much clearer than the held held, they appear to be louder usually and from experience I know that some users don’t extend the telescopic antenna when they answer the call, therefore the signals from these are weak. Normally there is sufficient ‘cross talk’ to hear both sides of a conversation when monitoring the base.

If you have access to a HF receiver, try tuning just above the medium wave broadcast band to monitor telephones around the 1.6 MHz region. These base stations carry a long way on medium wave and sometimes can even be received o­n a domestic MW radio if it will tune up high enough. I always thought this was a bad choice of frequency for a telephone service since it was accessible to quite a number of people! Be aware when monitoring this range, it is highly likely that you will pick up several base stations in use o­n the same frequency and as a result you will hear much interference as one base station swamps the other with a strong signal. I have monitored times when you hear one conversation only to be wiped out by another stronger signal straight over the top!

Another surprising finding is to go mobile with a scanner tuned to these frequencies. You will hear many frequencies in use and you will marvel at the range of these telephones. That’s about everything you need to know to get started monitoring cordless phones but please note that it is actually illegal to monitor these frequencies in the UK. The information provided in this article is for information purposes only so don’t get yourself into trouble!