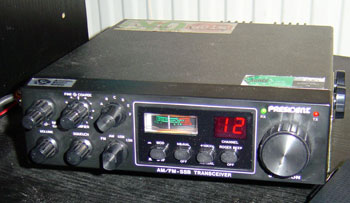 Paul Beckett takes a look at one of President’s most popular CB radios, the Jackson. This radio has aquired an almost legendary status amongst the CB communities. This is the first review in the CB section for quite some time so enjoy! The president Jackson has been in production for a number of years, right back to the days of the silver fronted Jackson in the early part of the eighties. This radio has got to have been one of the longest production ranges in the president series and even today it out performs most other Uniden based chassis.

The review model is the 240 channel variant and appears to have come from France due to its large and colourful stickers stating “Radiocom Privees France”. The channel selection is achieved through 6 banks of 40 channels (A to F band selector).

One of the reasons why this radio is still so popular despite not having frequency displays or scanning is because of it’s simplicity and the coarse and fine tune facility, this can alter your transmit frequency right down to the zero’s which we have been able to confirm with the review model. Channel selection is facilitated through a very large black channel change knob on the left-hand side of the radio. In practice we found this very easy to select the correct channel whilst mobile as the knob has a very positive “notchy” feeling to it.

Looking along the front panel of the Jackson you can see four buttons, these include Modulation monitor/Signal meter (RF), the famous noise blanker that really doesn’t do very much if you are a home based user (and is often removed for the purpose of a low power switch), a useful 10 KHz shift button allowing access to the alpha channels thanks to the old FCC frequency chart and finally the switchable roger beep. At this point we must mention the roger beep, it’s a nice mellow sound, not too offensive on the band compared to some other radios that we’d care to forget (ie, Mustang!). 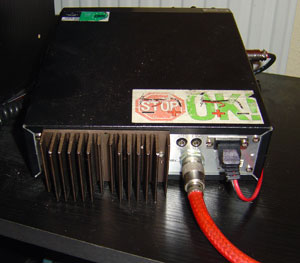 With regard to the signal meter this is provided by a very much standard S Meter that comes fitted to almost every other radio in this genre. Illumination is provided by a single bulb that adequately lights the green and orange scales. The only other lights to be found on the Jackson are green and red TX and RX lights to show transmit and receive respectively.

On the air the transmit performance of the Jackson is excellent. The review model measured 25w on FM and 30w on SSB modes. The power is not variable which could be seen to be a disadvantage for those who are plagued with TVI. Many Jacksons are sent to the rig doctor to have the power modification fitted and this can be done through one of the buttons already mentioned, in particular the Noise Blanker which is the usual one that gets the chop!

Having spoke to quite a few breakers around the local area and got radio signal reports it was obvious that the Jackson is performing very well indeed and most stations reported crystal clear audio using the standard microphone on both FM and SSB. The AM mode was not tested due to a lack of stations on the band.

The Jackson also works extremely well with a range of different microphones including pre-amplified ones such as the Astatic Silver Eagle, Sadelta MB+4 and the Sadelta Echo Master Classic. None of these microphones overloaded the AF stages on the transmitter.

Reception wise, the Jackson seems to be above average from this class of transceiver. Incoming audio was very clear and the sensitivity seemed to be on par with other similar radios including the President Lincoln, Connex 4800 DX and the Ranger 3500. one of the main complaints with the Jackson is overloaded signal reception in the SSB mode, When listening to a strong SSB station the radio distorts badly. This problem can be cured by turning back the RF gain a little but we understand that a simple component modification can be done to banish the problem for good. Apart from this minor niggle the radio is a superb performer and is worthy of an addition to your CB collection and when use mobile would certainly be a great performer.

Overall a very good performer and for the price it would be hard to beat. They are available from a number of good CB shops around Europe including Rocket Group on Ebay Stores for £189.00. Go ahead and buy one, you won’t go far wrong! Also consider the President Lincoln as an alternative, these cost a little more money but feature a digital frequency readout and scanning and up and down microphone keys.