At a first glance the Freequency 122TX PMR radios look like basic but attractive two way radios, however there is much more to this twin pack of budget priced radios than you think. The front panel of this radio is black with silver speaker grilles and only 4 buttons to control every function of the radio.

The review package was supplied as a twin pack in the typical blister packaging style. Those who have read my previous reviews will know my feelings about this type of packaging and also the dangers of opening this very tough style of packaging with a knife! I must admit that the transparent packaging is very attractive and keeps the radios safe from water damage whilst in the retail environment but once they’ve been sold and opened the packaging can seldom be returned as it needs to be disposed of straight away and this could be a problem in the event of returns.; Anyway, enough about the packaging what about the contents? Well for starters you’ve got the radios themselves, charger and base cradle in which both radios can be recharged simultaneously and two sets of AAA ni-mh batteries. If that wasn’t enough there’s also a single sheet user manual with the basic operation of the radios outlined with an illustrated picture.

I always try and operate radios without reading the manual first as this is a good test of their user friendliness. Whist I did struggle a little with finding out some of the more advanced features I managed to do the usual and most important features such as setting the sub code (CTCSS) but I couldn’t find out how to make the radio scan!

One of the first things I noticed about these radios was the size, they are extremely compact but feel great in the hand, they certainly appear to be solid and unlike the Binatone MR-600 they actually stand up and their own without falling all over the place. On pressing the PTT bar the LCD display lights in a bright red colour which proved very effective in the dark. The lighting can also be displayed by momentarily pressing the “M” button on the side of the radio under the PTT bar, if this key is held down for more than one second it releases the squelch until pressed again.

Looking at the front panel of the radio there are two arrow keys displaying up and down arrows. In standby mode these simply change the volume up and down through 6 stages. The 122TX doesn’t really have a very quiet volume setting; It starts off at a medium kind of volume and goes up to very loud. I would like to see a larger range of volume levels implemented on this set as even at the lowest volume setting they appear to be too loud for late night monitoring. That said the received audio quality on the set was very good and had plenty of volume, if slightly lacking in bass. For the size of the radio this is perfectly acceptable.

The mode button on the 122TX is multifunctional. This allows the setting of the channels, CTCSS Sub Code and Roger Beep settings. The o­ne hidden function I couldn’t find was the scan facility. I was particularly interested in getting this working to see if I could find anyone on the bands. After investigating the manual I discovered that this was accessed by a quick press of the power button. Easy once you know how! The scan feature was quite impressive, stopping on a number of busy channels within 5 minutes of scanning our 8 local PMR channels. Then the disappointment came, the scan resumed on a busy channel after about 4 seconds. This is a shame as I would much rather have the option of setting a resume scan or hold on busy scan. This isn’t really a problem but it would be nice to have the choice. The scan works effectively but doesn’t decode CTCSS codes so therefore even if you can hear people on a channel you won’t necessarily be able to tell which code number they are transmitting on unlike the Motorola series of radios.

Speaking of CTCSS codes, the Freequency 122TX has the standard set of 38 matching up with almost all PMR radios made in the last few years so you should have little difficulty pairing these up with other brands of radio. Indeed in our tests we used these with Motorola, Binatone and C&W branded radios without any problems whatsoever. The transmitted audio from the 122TX was really clear and great through all the radios and the receive sensitivity appeared to be on par with the best radios including my reference point the Motorola T6222s. At some locations the 122TX even appeared to be slightly more sensitive than the T6222 which certainly gives it credit for such as low priced set. More like this one please! 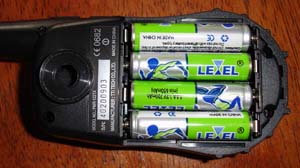 So what else can the 122 do? Well it has a roger beep, a bit like a mobile phone basic ring tone. Unfortunately there is only one call tone available and it is accessed by double-pressing the PTT bar quickly. Believe it or not this works very well but a large group of people using the same radio would probably be confused as to who is calling due to a lack of variation in the ring tones.

A good range of accessories are available for the 122TX at the TTI website http://www.tti.uk.com/ – these include leather cases, waterproof cases and earbud microphones. It’s great to find a company that supports its products and TTI is one particular outfit that really does keep this philosophy in mind. The leather cases are a welcome accessory to avoid everyday knocks and scratches that might occur whilst out and about. The accessories seem reasonably priced and TTI even has a forum on their website which is a great idea as potential customers can ask questions about the products before purchasing.

All in all this is a great little radio package and represents fantastic value for money. The build quality seems higher than expected in a budget radio, they look smart and work extremely well when compared to more expensive models. Numerous reports suggest that these PMR’s are extremely sensitivity and still hold the claim to fame for PMR446 DX records on http://www.446user.co.uk/ and other places.

You can purchase a set of these online from http://www.tti.uk.com/ and other good retail stores currently priced at £49.99. Will I be keeping these little radios to use in everyday activities? You bet!