Our first review in the new HF Radio section sees John (ddraigmor) reviewing the Grundig Satellit 800 Millennium HF receiver and finds it to his liking, but is it worth the £400+ price tag?

Over the years I have been an SWL I have owned some fairly decent bits of HF kit. These include a Yaesu FRG7700, a Realistic DX-394, an ancient valve receiver which I cannot remember the name of, a Sony ICF-Pro80 and a Sangean ATS803A – in their way all decent radios with the Sony being an all time favourite due to its ruggedness and portability.

However, as I moved on in life I reluctantly had to part company with my beloved radios although the internet allowed me to play with other people’s – never satisfactory! Then, late on in 2004, I decided it was high time I got back into things and looked around for something that would suit. Having always hankered after a Grundig, I settled my sights on the Sat800 and – feeling guilty about the amount paid for what my partner called “just a radio”; – doshed out £400 for one. I have no regrets!

Ok, so the purists amongst you may argue that this is a HF set and, as such, has no place on a mainly scanner forum – and you’d be wrong! The Sat800 is a tool for the serious radio enthusiast who might want to listen to airband on both HF and VHF, HF services in general, all the bangs and crackles that make SWL’ing such a pleasure and the many – and varied – sounds from around the world. 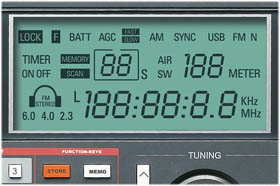 Despite its German name and lineage, the set is made in China – indeed Tecsun sell their own Grundig style set – exactly the same looks – although I have heard it is not quite as sensitive as the Sat.. What’s more, the 800 was designed in collaboration with the R.L. Drake Company, and took many of its features from their own Drake SW8 receiver. That is some reccomendation! The reception, from the rather lengthy whip is incredible. Local stations that cannot be heard on my kitchen FM set came in well, and when conditions have been right, the normal VHF range has been extended and I have heard stations in London and the South East – and this from the middle of my lounge on a whip!

Coupling the Sat800 to an ATU and throwing – literally – a long wire out the back door showed why this set is ranked up amongst the best in class. on some stations, comparison with the whip showed a 20dB increase in signal, although far more extensive tests would need to be done to confirm how accurate this really is. Whatever, the acid test for me is sitting on 2182kHz, the Marine Calling and Distress frequency, and hearing Aberdeen Coastguard requesting a radio check (5/9 with me!) and being answered by Ostend Coastguard as the same. on a random wire. In the evening. From my living room in Oxfordshire. In the afternoon, when HF coverage is normally 150 nautical miles in daylight, extending to some 500 nautical miles at night. Impressed? Oh yes……!

Playing with the filters, the Sync and SSB buttons – very nice metal ones built to last – showed that distant signals from the crepitating ether could be discerned fairly easily and it wasn’t long before I was using the set to haunt the old places – Edinburgh Rescue, some numbers stations, marine HF band – all of which were received well. Bandwidth can be adjusted to suit and this also helps when trying to discern weak stations from local higher powered ones – not always – but enough times to make me realise this set is very definitely engineered rather than built. on that note, the set is built like the proverbial brick outhouse! The dials and buttons are wobble free, the main tuning dial is made of metal and feels smooth to work, fast enough to go back to something you just heard and yet slow and accurate enough to stop dead on.Now some tech details. The set operates in the following bands: 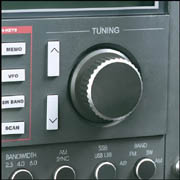 The set has two antennas – a massive 1.41 metre telescoping whip and an inbuilt ferrite road which is aimed at 100kHz to around 1800KHz. It has provision at the rear for 50 Ohm via a SO-239 connector or two terminals for 500 Ohm with a ground. It can also be hooked up to a 75 Ohm antenna via an ‘F’ type connector for services between 87 and 137MHz. I fly lead a short coaxial cable from my external ATU to the SO-239, throwing a random wire out from the ATU itself. It works for me! For airband I use the sets own antenna.

The set also features features a 1/8″ Headphone jack, analouge S-Meter, treble and bass controls – useful when listening to music on VHF. It has a keypad for frequency entry (direct) and memory storage, It also has a ‘Line Out’  jack which will be useful to monitors who tape BC and other transmissions. 70 memories more than satisfy ‘favourites’ and the scan function is useful. Front panel LCD display is large and easy to read, providing a multitude of information. Figure readout is 7 digit and it is backlit if needed.

Wide-medium-narrow filters add to shortwave and SSB listening. These are pre-set at 2.3kHz, 4.0KHz and 6.0kHz. Auto selection of bandwidth happens in FM, reverting to the 6.0kHz setting, 2.3kHz is default for SSB. The 20dB attenuator is powerful – maybe too much so when trying to glean signals that do not twitch the ‘S’ meter.

Living with it is also easy, if addictive! The set – which is large and measures almost 21″ x 9″ x 8.5″, weighing in at a respectful 14.5lbs ( I kid you not…) – is definitely an eye attractor. Portable it is not – and I have heard it eats batteries like nothing else on earth! However, mine resides on its own shelf against one wall in the lounge and even my partner pays it no attention – unless I strap the headphones on of course. Then I get accused of ignoring her which is nonsense…..! Oh and you also get a pair of Grundig branded headphones which are also excellent to wear and offer good signal handling.

So, bearing in mind its location, what have I heard on it so far? Best place to start is the marine band. on its own whip I can regularly get Rogalund Radio (Norway), Lisbon Radio, Olympia (Greece), the UK HF stations such as Aberdeen Coastguard, Falmouth Coastguard and the Netherlands and Belgian Coastguard stations. Ship voice stations have been heard on both the 4 and 8MHz services.

Aeronautical services – Shanwick and Gander – have also been heard across most of their frequencies – which brings me neatly back to the start. If you have an airband scanner and are looking for a HF set to monitor flights, then this set must be on your list. Armed with a good antenna, this set offers excellent potential as it is stable enough to handle data modes via a PC or stand alone demodulator. It can be built on with extension speakers, filters – the list is endless.

As for the audio on broadcast VHF….well, let’s just say it is easily tailored to suit but I never grow tired of listening to the rich, deep tones that this set produces. Overall, it is exactly what I had dreamed it would be and I am not disappointed. Would I buy one again? Oh yes!