John Griffiths takes a look at a new budget priced scanner – The GRE PSR-295. It has 1000 channels, ten memory banks, AM and FM modes, CTCSS & DCS sub audible encoded squelch modes plus a 16-character, 4 line, alphanumeric liquid crystal display and comes pre-programmed with search ranges for Marine, Air, CB, PMR and Ham Radio. Notably this model includes the Military Airband too. Coming in at a price below £140 it’s not going to break the bank but is it any good? Read on and find out.

I have waited for this scanner for oh so very, very long indeed! I could have got something quicker I suppose. Something more expensive and so technologically advanced, you’d be able to complete a Master’s Degree in Applied Electronics after learning to programme it. However, I’m a belt and braces man. I know my limitations and I know exactly what I want. Simplicity, cost effectiveness, ease of operation and good ergonomics. When I first set eyes on the PSR 295, I knew I’d found what I was looking for.

In terms of other kit, I have a PSR 282 for air band but monitoring was limited to civvy flights so whenever I heard a military aircraft checking in I’d kick myself for not having a mil air scanner to listen in to. Around this neck of the woods I am spoiled for choice as I have both RAF Benson and Brize Norton on the doorstep, while the US Air base at Fairford is just over an hour away by car. Weston-on-the-Green (where they do para drops) is almost in line of sight so you can perhaps imagine my frustration. There is nothing quite as saddening than seeing a C-130J making a low run over Weston knowing I can’t hear any comms!

I’ve been into radio for many years and have owned some high grade receiving kit as well as budget types. I’ve operated on HF as well as dabbled with VHF and UHF and as I also used to write a column on scanning for a well known radio magazine, I reckon I know what I want. High spec kit is not something I enjoy (although I admit that their capabilities are impressive) as I want to power up and go rather than spend a fortnight trying to decipher the operating instructions! There is good affordable kit on the market such as the Bearcat range, and they are very affordable – but they don’t always cover the part of the radio spectrum I am interested in. Until now, full coverage on military frequencies was limited to kit that was both expensive as well as quite tough to programme for the average user. So I was interested when the PSR 295 hit the stands some time ago to excellent reviews. Here, at last, was an affordable and simple scanner with not only military air band coverage but a whole host of features previously only available in more expensive sets such as alpha tagging and 1000 channels. It does not have selectable channel steps as these are automatically fixed depending on what band you are scanning- but that is a small price to pay for what is a surprisingly feature packed set.The steps can be changed by using the detailed ‘how to’ guide in the manual – but I haven’t needed to do that yet. I also don’t think it is a feature that I am interested in if I am truthful.

I bought my set via a supplier who stated from the outset that it was not in stock. They did, however, keep me advised as to when it was due and once I’d received their e-mail telling me it was on its way – and giving me a Post Office parcel tracking number – I had the set with me within 24 hours, which is not bad. The set cost, with VAT and P&P, £140 and was purchased from Radios UK. My thanks to them for their patience when responding to my e-mails quickly and knowledgeably.

Meanwhile, while I waited, I invested in a better portable antenna (Watson W 901 ) and a scanner frequency handbook. In tests with my PSR 282, this antenna performed far better than the one I had bought for it ( a MRW 100 from Tandy – Radio Shack) and showed immediately that it outperformed the MRW 100 easily. It is an air band dedicated antenna, cut for maximum performance on the civil and military bands and also able to transmit on either to a max of 10w PEP. It was an expensive purchase at £20 – but I am more than satisfied with it and recommend it highly. 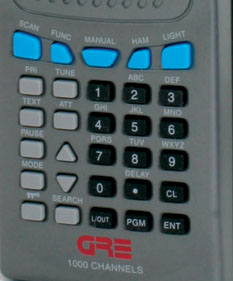 When the set finally arrived, I slapped in a fully charged NI-Cad battery pack. Like its sister set, the PSR 282, the PSR 295 has a built-in charging circuit for rechargeable batteries. If you intend to use ordinary batteries, then power is via 4 x AA type batteries. External power is 9V DC.

I replaced the supplied antenna with the Watson and sat down to programme it. Inside of an hour I had put 60 of my favourite frequencies in for Brize, Benson, Fairford and London Mil West, alpha tagged them – and was hearing the traffic I had, up to then, been missing. With the PSR282 on civil air and the PSR 295 on mil air, the house sounded like a ComCen! interestingly, despite being less than a foot from my PC, there was no interference heard on the PSR295. The PSR282 does suffer from interference when placed near the computer so I don’t know whether it is better shielding on the 295 or just the fact that the Watson antenna is a superior one.

How does the set look? It is a bigger, chunkier set than the PSR282 and when placed alongside other scanners, would possibly look awkward, even brick like. Having said that, size isn’t important and I have a portable that is easy to use ergonomically, with solid feeling buttons, a smart grey plastic case and a very easy to read LCD screen. I have used smaller scanners, but they are usually fiddly to operate, with a smaller LCD readout that is not always easy to catch. As the PSR295 is a fair old chunk, I have no problems reading the display from a distance. The size may be an issue for those who like their scanners small – make no mistake, you can definitely see this one – but given its budget market, I don’t find this a problem. Given dimensions are 157 x 62 x 41mm with a weight of around 300g with batteries and antenna.
Audio is crisp from the internal speaker, with no sounds of distortion and while I have to yet try it out on an external speaker, I am happy with what I am hearing. On headphones – both single earpiece and double over the head types – audio is easily understandable. No problems there.

Operation was, I thought, very easy indeed. A careful read of the instruction manual showed me how to programme frequencies in, and the directions are both very clear and straight to the point. As I said earlier, within an hour I had mastered the set enough to be able to input frequencies and alpha tag them (name them) – which can’t be bad. I didn’t have to worry about mode or step size as the set does this itself, so frequency entering was both basic and extremely easy to master. The set has a 1000 channels available in 10 banks of 100, so there is plenty of room for adding what you want into personal favourites. Channel steps are 5, 10,12. and 8.33 kHz steps which are band dependant.

I was also impressed by the set’s pre-programmed ‘set’ frequency ranges. It covers the whole marine VHF band, channel by channel, all CB bands, PMR channels, the civilian air band and amateur bands. You can, if you wish, simply use the front panel to get to these pre-set frequencies and just use them straight away. As I often visit my father on the coast, and listen to marine VHF, this is a bonus as I don’t have to input the frequencies nor scan and tag them – I simply look for the marine tag and the set starts on the main calling frequency Channel 16 – 156.800MHz.

So, armed with the latest frequencies via ‘Airwaves 2006’ (Photavia Press) and also being a member of Fighter Control – which can be found on http://www.fightercontrol.co.uk but you need to register to get the best stuff (it’s free) – I put the set to work over the first week I had it. As I said, I had already programmed the ‘local’ frequencies I was interested in and as the week wore on, input others that might be of interest. The idea was to cover the mil air band only, and to see how the set performed. At work I am overflown by the Merlins of 28 Sqn and the Pumas of 33 Sqn as they transit to both Brize and Lyneham. I am also overflown by traffic in and out of Brize ( VC10’s of 101 Sqn, Tristars of 216 Sqn and C-17A Globemasters of 99 Sqn) plus the odd C-130 and Chinook overheads. Weston-on-the-Green is also nearby, used for para drops, so that was also input. Leaving the set on the windowsill of my office (on the second floor ), I was able to clearly hear Brize Ground, Tower, ATIS and so on. Plus the Benson helo’s and the para drops. Taking the set back home in the evening and just leaving it on the kitchen windowsill also produced some great results – so much so that the poor old PSR 282 was neglected!

In summing up, I would say that this entry level scanner far exceeds its very low price. Add a good dedicated antenna to it and you will have a set that I believe can punch its weight with scanners costing twice as much. It is very easy to operate and programme. The size might put some people off it but I believe that is a very small issue when you are getting something that opens up the mil air band at whats described as a base level scanner. I, for one, don’t think it deserves that title. If anything, I would champion it as being an affordable set with some very useful features and one that will keep me very happy indeed now the airshow season is upon us.

There is one quirk – until I realised exactly why it was the way it was! With the LCD facing you, it is apparent that the volume and squelch names seem back to front. It was only when I had it on my belt that I realised it is because you can read them better……unusual,.to say the least.

It is not a set I would recommend for those interested in other areas of scanning as it is a fairly conspicuous size and does not lead itself to ‘covert’ use. For that sort of use you would be better paying for something you can fit into your pocket. However, if you want my advice and are thinking of getting something specifically for the civil and military air band that is not going to break the bank, then this is what you should give serious consideration to.

About Transmission1 69 Articles
Simon is the founder and owner of the TM1 website. Since 1999 he has provided the online community with a place to meet up with like minded radio enthusiasts and discuss projects relating to the hobby and a large number of equipment reviews and resources totally free of charge.