Mark, Pantenneman tries out the Goodmans GMPR116 for TM1:

While testing out the Puxing PX777plus handhelds, the following weekend I decide to bring down my Tevion Action 850’s that I own to my Girlfriend’s place over the weekend out of random curiosity. I had an aim to solve a communication problem.

My GF mentions her best mate, who often runs out of credit. And to confuse matters, owns a couple of different mobile phones and she is never entirely sure which one to ring or text sometimes. And as a result, there is a breakdown in communication when one of them runs out of credit for sending text messages, or sends text messages to a mobile that she isn’t currently using. Her mate lives something like several minutes walk away from my girlfriends house at the most, which isn’t even a mile away. Said friend also saw me out and about with the Puxing that weekend, and deemed me to be “a bit of a nutter with those big mobile phones, what’s those for?” Pfft, women eh? What do they know? Anyway, I digress…

During the tests of both the Tevion and the Puxing PX777plus (the later on both high or low power settings), I discovered that from the location where my GF’s mate lives that our signals to each other were perfectly workable with no flutter, drop outs, or loss of signal. Also, this is combined with the fact that her mate lives in a 3 storey block of flats (apartment to our overseas cousins). Naturally, due to the nature of UHF signals and “Line of Sight”, it was a no brainer to discover that the handhelds would obviously work from some 60ft above ground which could be used to their advantage. I then set upon a plan to solve the communication conundrum.

After my GF discussing my tests of the Puxing and Tevion with her friend one night, her friend suddenly changes her tune when she discovers that you don’t have to put credit into PMR446 handhelds, and that you can communicate for free.

I searched eBay sometime last week and patiently waited for a bid to end on a set of 3 PMR446 handhelds, with my finger hovering over the left click to bid. Success was mine as I won the bid for them at a mere £12. Yes, that’s not a typing errpr. £12 for x3 PMR446 handhelds. An online source quotes that a set of 2 of these PMR446 handhelds are £39.99, and an extra unit is £24.95. Naturally, this is a killer bargain that I have acquired here.

The handhelds in question are a set of Goodmans GMPR116.

They arrived fully boxed, and with instructions. And after a good overnight charge, they fired up well with no problems on any of the handhelds. Without further ado, I bring them with me on my travels to my GF’s gaff over the weekend, just about arriving in the post on time.

After showing my GF and her mate how they work, we try them out. Amusingly, her mate automatically thinks they act pretty much like mobile phones, and startled herself when I tried them out in the kitchen when I sent a Call tone. Despite this, they are quite interested in the idea of free communication without the need of mobile phones and stick with figuring out how they work.

Me and my GF went home eventually, and we naturally found out that her high location in the block of flats worked very well in their favour, with some fading and fluttering only occurring when my GF was in her living room with them, and her mate in her living room (as they are facing away from each other, and signal loss is caused by the walls and stairs of the flat), but besides this, the signal was mostly very intelligible and workable between both handhelds. Sensitivity was not quite as good as my Puxing on the same channels, but they are an entirely different class of radio altogether so it’s probably unfair to compare the Puxing in this case. 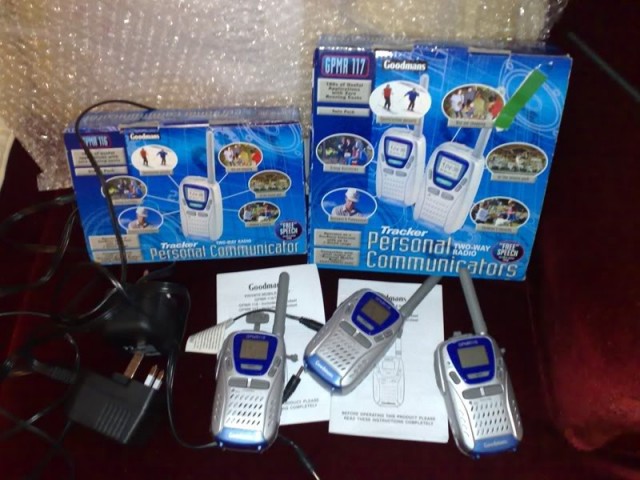 As a result, my girlfriend and her best mate can easily chat to each other with no call costs. They are both very happy with the new present, and I couldn’t even get my girlfriend away from the handhelds when I rang her up tonight, after enjoying the fruits of this communication solution. Now, if only I can get her interested in the rest of my radio collection…*ponders*

In today’s modern day society with the mobile phone, people seem to have forgotten cheaper and more cost effective solutions as exhibited in this scenario. In this case, a cheap communication solution was right under their very noses without realising the possibilities.

Why not adopt a pair of PMR446 handhelds to chat to one another if you live reasonably close to a best friend, relation, or whatever? It can easily pay for itself as demonstrated in this case. Not forgetting that there are quite a few cost effective bargains to be had from the likes of eBay if you didn’t wish to go to the expense of brand new handhelds that you may not use.

These findings have certainly been food for thought…