I’m in the process of umming and arring over which remote headed CB radio to purchase. It’s currently a toss up between the tti TCB R-2000 and the Lafayette Venus. I’ve crossed the Albrecht AE-6890 off the list on the grounds that the supplied microphone is pathetic beyond belief. Who at Albrecht thought that cheap and nasty microphone was a good idea on an expensive CB radio?!?

In the meantime I picked up a 2nd hand Intek M-150 Plus for beer money to satisfy my need for listening to either nothing, Olga from the Volga, or locals abusing one another, as I travel.

The Intek M-150 Plus is a basic, but relatively capable CB radio.

There is no signal strength meter. 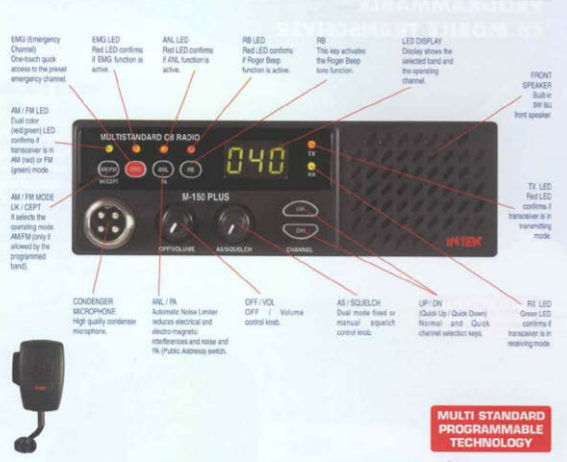 It’s a ‘multi-standard’ CB radio, with means it covers all the European CB allocations, including the useful Spanish setting of 4W AM/FM on the CEPT 40 channels, which will become the default European CB standard (including in the UK, eventually! ).

The channel change is only controlled by the push buttons on the front of the CB radio, no rotary control, and no scan function. The microphone is a basic but competent unit, but it has no controls on it apart from the PTT, it is however a ‘proper’ size and is quite comfortable to use.

In use the radio is pretty much what you would expect from an entry level CB radio. No scan was a serious niggle, the lack of users on CB make a scan function very useful when you are driving about. The received audio is loud and mostly distortion free from the front firing speaker, and my transmitted audio was reported as “OK” to “good”, so no problems at least. The segmented 3 character LED display is a little bit easier to read at an angle or in bright sunlight than some of the newer LCD displays and the lack of signal strength meter is either ‘meh’ or a deal breaker, just depends on your personal preference I guess. While I’m driving, I don’t care what your signal strength reading is. As long as I can hear you, that’s all that is important. 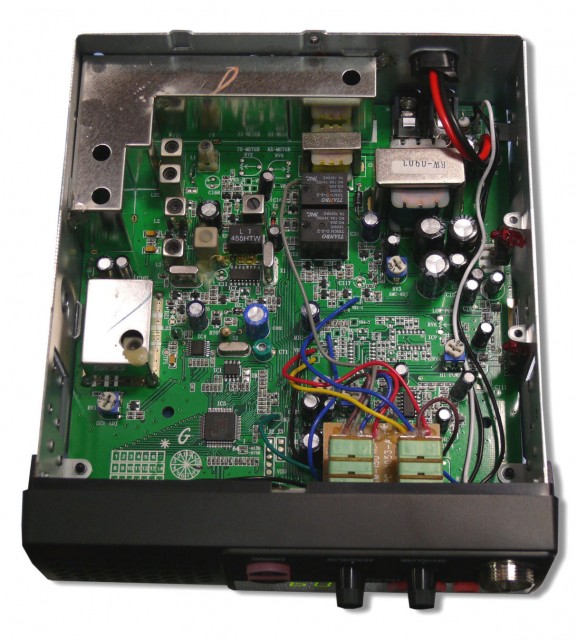 The build quality is pretty much what you expect from these modern CB radios, on the inside it’s a mix of SMT components and old fashioned capacitors and pots. It all looks ‘reasonable’ and It works. It’s no Yaesu, Kenwood or Icom, but then what is?

Overall, it’s not bad for the money as long as you don’t need a scan function and aren’t prissy about needing signal meters.