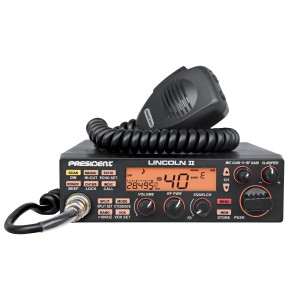 It looks like President have finally committed to launching the eagerly awaited Lincoln II multimode radio. Following on from months of speculation it would appear that the first radios will arrive at most dealers during the second week of January 2014. What isn’t so clear is whether the radio is a CB or Ham transceiver.  If you take a look at Presidents’ website you’ll see that it is listed under both categories – one as a Ham radio and the other as a curiously titled “not certified CB radio”! Whatever this means it appears to be good news in terms of the appeal for this radio.

At the moment from the information on the web you could be forgiven for believing that this is just a 10m transceiver as the official specifications show the frequency coverage to be 28.000-29.700 MHz but on the other hand you can clearly see the band indicator on the LCD panel, not forgetting the prominent Echo button and Roger Beep functions. Indeed, how many ham radios can you think of that need an echo chamber! OK President we believe you that ham operators value the echo function whilst chasing exotic DX on 10m!

I’m sure that all will become clear in the new year and fingers crossed that the “CB” version of the radio might even be type approved to euro-norms meaning that people in the UK can join in the AM and SSB goodness when Ofcom finally gives the go ahead to the European Communication Committee (ECC) Decision (11)03 meaning July 2014 could be party time for the Brits if this radio is permitted. Otherwise it will be the choice of the freebanders which will probably happen anyway!

One of the most interesting features of the radio is the CTCSS and DCS encode/decode function as this would make it very useful for gateway operation which is currently enjoying much success on PMR-446 in Europe and we’re now seeing quite a few CB gateways appearing too.

For those who can’t wait any longer and wish to drool over the  specifications of this fine radio here they are:

Head on over to http://www.president-electronics.com/en/The_CB_Radios/Fiche_produit.php?REF=TXSE041 to see the full details for the radio.

We’ll try and get one to review here on TM1 in due course. The big question will be centred around the price as per usual. Is it worth the asking price of around €300 euro (£250)? Only time will tell we guess… TM1.

Update: No sooner did we write this article we also found that President are launching the Grant II which is already appearing on some Spanish websites. This is another multimode transceiver that looks similar to the Uniden 980SSB CB Radio already on sale in the States. For now, all we have is a link to the following website giving some clues as to what might be coming: http://www.ondamania.com/b2c/producto/president_grant_II/1/president-grant-ii-asc-emisora-de-27-mhz-con-am-fm-y-banda-lateral

About Transmission1 69 Articles
Simon is the founder and owner of the TM1 website. Since 1999 he has provided the online community with a place to meet up with like minded radio enthusiasts and discuss projects relating to the hobby and a large number of equipment reviews and resources totally free of charge.